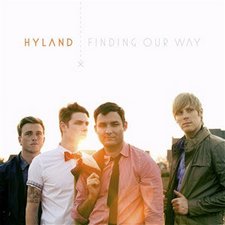 Like any band with some experience on the road, Hyland has certainly been through their share of ups and downs. But not every band can lay claim to having their gear stolen not once, but twice, in their tenure, and in February of 2011, just a few months before the release of their Tooth & Nail Records debut, Weights & Measures, just exactly that happened. In the midst of uncertainty and loss even a year after these misfortunes, they have run into significant questions about their journey, and those questions have culminated in one place with their sophomore release, Finding Our Way.

With both plenty of worthy tracks to rerecord and a slew of new songs to try on for size, Hyland's debut on Tooth & Nail was a cobbled together mix that lacked a consistent flow. After some pure alternative rock tracks with Run Kid Run-meets-Anberlin influence were interspersed with radio-friendly hits for marketable potential, Weights & Measures never felt connected or, well, balanced. Fortunately for Finding Our Way, most every song does fit well in one cohesive set this time around, creating a better "album experience" overall without an unpolished, compilation-esque feel of before. While the solo acoustic "Well Done" may have been better as the closing track than "Never Fails You," things always feel reasonably leveled out, but the dynamics are still diverse enough to create constant interest.

As the album's title's suggests, Hyland is still seeking out their direction both as individuals and as a brotherhood. Album openers "Power & Love" and "Wondering & Waiting" introduces Hyland's concept for the album quite well. With uncompromising percussion with a little electronic influence for taste paired with Jon Lewis's resounding vocal style, the album does get off to a good start that feels a little more polished, and distinctive, than what "Jumping the Gun" did just one album ago. "Brothers" and "Work In Progress" are the shortest and most concise offerings here, but they are surprisingly some of the most accomplished on the record, setting the tone for a willingness to improve ("There's a masterpiece within the mess/give it all you got, 'cause it's not over yet/three steps forward, two steps back, it's the one more step than you used to have"). It's a collegiately influenced songwriting style, but with one overarching theme of overcoming obstacles and moving forward in spite of them, the album's theme is crisp and clear. The theme takes many perspectives, such as yearning for a parent's approval ("Well Done"), scraping by as a newly married couple ("Lucky In Love"), and relying on God to get through difficulties ("Calm in the Storm," "Never Fails You"), and these multiple shapes and sizes only add value to the final product.

There are still some aspects that Hyland would do well to iron out, because not every track is as strong as others. While the tracks before and after them blend everything together more smoothly, there is something still incongruous about the stark radio-friendliness of "Beauty In the Broken" and "More Than Famous." While very complete songs without any lyrical pitfalls, something about the string sections and the single-esque compositions still sticks out a little too much in light of the rest of the album. No doubt fuelled by the success of "This Love Is Free" from Weights & Measures, these tracks are still interesting enough, but they also clash with the alternative pop/rock sound Hyland executes in every other area of their approach. They are closer to leveling out the equilibrium, but it's not there quite yet.

The fact that Hyland is still relentlessly touring and making albums is certainly astounding, as not many bands can jump right back up when all their gear is stolen on a whim. But with this undying commitment to their art have come noticeable improvements, and Finding Our Way is evident of these strides. It may take a little more time for Hyland to become true Tooth & Nail roster staples, but slowly and surely Hyland is well on their way to even bigger and better things, and Finding Our Way is a thoroughly enjoyable musical pursuit.

Hyland is already releasing their sophomore album only a year and a half after their Tooth and Nail debut. The group's second effort, Finding Our Way, finds them using fewer guitars and more electronics to fashion a much more straightforward pop sound overall. While the songs are no doubt catchy, the album suffers because of the missing guitars and light distortion that aren't as prevalent this time around. This isn't to say there aren't guitars at all, but too often this issue is more of detraction than a fun new direction. The guys score big with the catchy pop opener, "Power & Love," as well as the seemingly Mae inspired "More Than Famous;" each could be considered album favorites. The record takes its biggest hit in the final two tracks though. The choice to end the album with the very mediocre "Never Fails You" versus the second to last track, "Well Done" - a soft, powerful, and honest song that is the perfect closer - turned out to be a very unfortunate decision. All-in-all, Hyland delivers a solid second album. It may not be as well-rounded as one would hope, and some big opportunities may be missed, but it does manage to give the listener an enjoyable listening experience. Finding Our Way won't win album of the year, but it is, however, worthy of your time. - Michael Weaver, 10/22/12