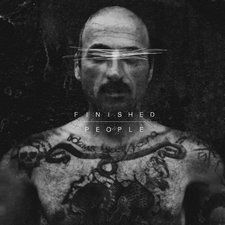 In the past year, we have seen an outbreak of chatter regarding metal bands in the Christian scene. Are they Christian? How many of their members are even faithful anymore? Are they just pretending? And it doesn't help that lyrics are so vague these days, even from artists who profess their faith, that no sound example can be made of them. Personally, I'm sick of it. That's why California's Sleeping Giant are so refreshing. They do exactly what Christians with the talent for music and gathering people in front of them should be doing. They are worshipping and ministering wherever they go.

In their fourth studio album, Finished People, they have harnessed a specific theme: that those who are downtrodden, who have given up, who are seen as useless and finished, still have limitless potential to be used by God in ways that no human could predict. In the title track, vocalist Tommy Green screams, "God sees saints in the cell blocks/We see revival in chains/ The world calls us the finished ones/ God forgive me for bringing tears to my own/I hope you won't forget me/or I am finished."

The ferocity with which they deliver their message is hard to ignore. Each song opens in tones of impendence, with calls of duty just pounding down like a hammer to your ears. "There is a sickness and we are the cure/The whole world will pass away but we will endure," for example, from the track "Blood Meridian." "I have the DNA of Heaven in me/Strongholds will fall when I pray," from "Victory."

Musically, I can't think of a better genre to relay this kind of God-desperate message than the blood-thirsty hardcore that Sleeping Giant dishes out. The original punk/hardcore spirit comes out in waves. They intend to pummel listeners with real zeal, real messages, crying out against upside down systems and broken standards. They scream and play with bravery, and unabashed honesty to a crowd that they really care about.

In past albums, we have heard a standard fare of hardcore yells and metalcore breakdowns, and a mechanical ear could say the same about Finished People, but suddenly from Kingdom Days In An Evil Age to this, we have a significant increase in quality. Guitar notes are sharper, the drums and lowtones hit harder, and the melodies in the clean vocals have improved drastically.

If you weren't a fan of Sleeping Giant before, Finished People might change your mind.

From their humble beginnings on Facedown Records in 2007, Sleeping Giant quickly became a name to remember in Christian hardcore. However, after their third, and (arguably) strongest album thus far, Kingdom Days In An Evil Age, the band remained relatively quiet aside from Thom Green's solo album as A White Flag. But with the band's activity increasing, and the subsequential news of new material in the works, fans were remembering. Finished People is Sleeping Giant through-and-through. While there's quite a lot of singing from Green, screaming and mosh pit hardcore are the name of a good portion of the game - but it always has substance. A lot of the people in the pit during these songs will be moshing because that's what you do at a hardcore show, but there will most likely be a few whose dancing will be celebratory because of the freedom they've found in Jesus. And, as heard in album opener "Clutches," Green screams "The only freedom I've found is radical love!" A big theme throughout the album is the concept of victory in Jesus. "Death Knell" uses a sample of someone talking about King David blowing the shofar in victory before the battle had even begun (knowing God would lead them to victory), while "Christus Victor" says, "Where death once ruled, now You reign, where sin once ruled, now You reign." Continuing this trend, one of my favorite portions is the very end, in the song "Victory." The song is sung mostly from Jesus' perspective, claiming Himself as our victory, and then the song stops, and Green sings alone the old hymn "Victory In Jesus." It's an incredible moment with a powerful song, and it brings to an end an excellent hardcore album. Finished People keeps seeing repeats in my playlist, and it's going to be a hard one to top by year's end. Easily the best heavy album to be released in 2014, this should be in the hands of every heavy music lover. - Review date: 8/30/14, Scott Fryberger

Sleeping Giant's Finished People livens up a year that has been largely disappointing in the metal genres. An obvious hardcore sound dominates the band's fourth album, but the quality is easily above many of their counterparts. Fears of a watered-down message because the band moved to--the let's just say "less than Christian"--Century Media Records can be laid to rest. The band has stood tall and boldly in their new home; it's encouraging to know that lost and desperate people will be introduced to their music, and a loving God, by their new label. Sleeping Giant has delivered a musically impressive album with a rock solid message. Metal fans should buy this record if they haven't already. - 9/16/14, Michael Weaver of Jesusfreakhideout.com