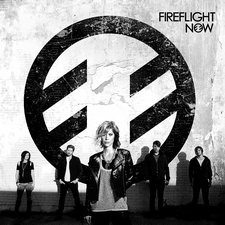 As a fan of both Fireflight's first album, The Healing Of Harms, and their second offering, Unbreakable, I was admittedly disappointed with For Those Who Wait. Thankfully, fans of the female-fronted progressive rock group don't have to wait long for the next album since Fireflight is right on the spot with their fourth biannual, full-length project, Now.

As usual, Fireflight starts off the album well with the first single, "Stay Close," which features fierce guitars and a great vocal outpouring from Dawn Michele. "Ignite" is a decent rock track, but its main goal is to build a bridge to the following track. "Escape" features lackluster verses, but the chorus, powered by the most chilling performance by Dawn on the album makes it one of the best tracks in the Fireflight library to date.

The album then goes into a slump as the group struggles to produce a rock highlight until the very end. Dawn overdoes the refrain in the chorus of "Prove Me Wrong," while "Dying For Your Love" is a progressive tune that sounds like it could have originated from The Healing Of Harms. When the title track does come to finish the album, it comes and goes in a fast-paced, electronic rock frenzy that is unfortunately easy to miss and forget. As far as ballads go, "He Weeps" easily evokes emotion much like "Name" from For Those Who Wait, while "Rise Above" is a less bleak, but still pleasant pop ballad. Standard pop rock tunes, which are well produced, if not necessarily innovative, round out the rest of the album.

Fireflight has always had a passion for singing anthems for (although not limited to) young people and about the issues they face on a day to day basis. However, over the course of four albums, some of the messages seem to be a little recycled. Take "He Weeps" for example; while it once again boldly asks God where He is in the midst of adversity, there's an undeniable sincerity in the desperation and passion in Dawn's vocals. Don't get me wrong; asking "where is God" in the midst of tragedy, eating disorders, and abandonment as a precursor to singing "He weeps with you /He weeps with me/When I'm on my knees/And I taste defeat He will never walk away" is great, but I think there is something to be said for shaking it up now and again.

But for those who can stomach the bits of repetition, there is a lot to like here. The title track, "Escape" and "Ignite" all focus on breaking out of either our dark places or complacency to something better. Several songs either speak to the truth of God's love or simply our desperate need for it. As anthems go, Fireflight does as terrific job of packing it in on "Rise Above" ("No one taught us how to say goodbye/Now's the time for broken hearts/Embrace today a brand new start/Leave the past and let love lead the way/And with every chance we take we find a reason/To give up on the hope that we all need If we just lived like we mean it/If we loved even when we don't feel it/We would suffer for a reason").

When I first listened to Now, I instantly liked the For Those We Wait sequel. However, with each additional spin, I was more compelled to listen to Fireflight's debut and sophomore projects for the band's raw rock sound. Although Now still retains Fireflight's passion and is a well-produced effort, it overall feels like an overly generic, modern rock effort that stands apart only thanks to Dawn Michele's strong vocals. Loyal fans of this talented group will certainly love this fourth release, but pickier rock listeners may be harder to win over.

It's been two years since Fireflight released their Grammy-nominated third album, For Those Who Wait. While that album may not have lived up to the groundwork laid by the memorable sophomore effort, Unbreakable, there were still quite a few memorable tracks contained within its ten-song track list to warrant being noticed. Enter Now, the band's fourth installment and their first recording with new drummer Adam McMillion (formerly of Search The City). The album puts its best foot forward with the blistering opening track, "Stay Close," which shows the band stretching themselves in new directions, as well as giving listeners an earful of what McMillon can bring to the table. From here, Now never quite lives up to the fierceness of its opener. Still, there are enough highlights on the record, which subsequent listens reveal, to make the album a rewarding listen. "Escape" may be the closest track to the opener in exploring new territory, while "Prove Me Wrong" is a melodic rock track that showcases Dawn's soaring vocals, and the emotional "He Weeps" follows in the footsteps of the previous album's "Name" in delivering a rock ballad that moves the heart. "Rise Above" is another mellow highlight that serves as an encouragement to the listener, while "Now" (despite feeling like an extension of the chorus from "Go Ahead," musically speaking) is a fine fast-paced anthem for overcoming adversity. Now is a good rock record on its own, but among the catalog of Fireflight releases, it may feel less daring than one may expect or hope for from the band's fourth album. Still, if you're looking for a diverse rock record with a softer side, Now is well worth a listen. - Review date: 3/4/12, written by John DiBiase of Jesusfreakhideout.com