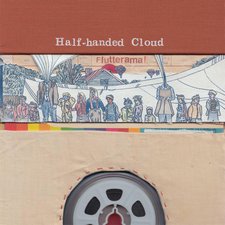 
Half-Handed Cloud may be one of the more obscure major label Christian artists out there, but the brainchild of John Ringhofer is nonetheless fairly prolific. He's been releasing quirky full-length albums through Asthmatic Kitty for more than twenty years now and shows no signs of stopping. Two-and-a-half years after his 60-track Christmas album, the next step of Ringhofer's musical journey comes in the form of Flutterama.

Let's be honest: if you're reading this, there's a pretty good chance that this album is not for you. Per the norm for Half-Handed Cloud, Flutterama doesn't utilize traditional verse-chorus-verse structures, nor does it pay any mind to how long each song is. Excluding interludes, track lengths on this album range from one minute to just over two and a half, averaging somewhere in the middle. But where the album really gets tricky for the uninitiated is in the vocal style, the clashing melodies, the random harmonies, and the off-the-wall instrumentation. Purposefully lo-fi (but not poor) production is the name of the game, and no sound or instrument is really off-limits, including the sound of rewinding cassettes and slightly-damaged tape. Ringhofer also makes ample use of your typical guitar, bass, and drums, but the album really takes its true form when he adds in organs, banjos, keyboards, synth, accordions, and whatever else he has lying around. Of course, these aren't unusual instruments by any means, but the seemingly random and unexpected ways they're used will really keep you on your toes.

None of that is to say that Flutterama is a bad album. In fact, after several listens and plenty of time to adjust to its eccentric nature, the album opens up and becomes quite enjoyable. It's as if John Van Deusen wrote a late-career Beatles album, then Sufjan Stevens took it apart and put it back together again, but without the original blueprints. And quite frankly, depending on your tolerance level, it can be rather charming.

Even Ringhofer's subdued singing voice has its own charm, helping the lyrics to feel innocent at times, and gentle even when confrontational, like in the closing track, "We Belong To You, But How Now Is Soon," which describes a deconversion from false Christianity ("You tricked us into thinking that we invited you / but it's you who called us to your chorus / so change your minds about who we are in your pews / whores and taxmen enter in before us / all of us are broken and we belong to you / we didn't reject Jesus, we forsook His cartoon"). His lyrics contain Biblical truths in conjunction with his own wrestlings and questions about the faith. "Bustin' Stronghodes" starts off strongly with an acknowledgement of God not only creating all things, but His victory over them all. This is further echoed in tracks like "Trick Leash" (which dives into the parental relationship between God and man) and the lullaby-like "Project Yourself Onto My Corpse." But the main theme of Flutterama really feels like humility, which we find all throughout the album. My personal favorite example is in the song "Handles," which says "I'm weak and wicked, can't untie Your sandals / peel up my face from the ground with Your love that handles," and then goes on to say, "You died and rose with wounds, are You still scabby? / How did our faith in You become so flabby / when You have a love that handles."

For the general public, this will be another hard sell from Mr. Ringhofer. But for the adventurous, and those music fans who have a taste for the out-of-the-ordinary, it has a lot to offer. When it comes to Flutterama, longtime fans should be pleased, and the newcomers have a great place to start. Just make sure to check your expectations at the door first.

If Picasso was a songwriter, I think hed write music like multi-instrumentalist one-man-band Half-Handed Cloud. Wait... no. If whimsy has a sound, it would be the disjointed joyous noise of John Ringhofer, AKA Half-Handed Cloud. Hold up-if Ringhofer was a color it would be...Ah-this is music for the mirthful soul struggling with ADHD. Though comparisons and metaphors of his approach to music-making fall woefully short (much like the abbreviated runtime of each track), one undeniably true thing is John and his music are anything but boring. All grasping aside, perhaps the best metaphor for the brief ditties comprising his newest album Flutterama, is that of the brief moment between clicking the camera button and the actual snap of the picture. (Wait, is that what hes actually going for?!) These are the musical snapshots of an eternal optimist: upbeat, catchy, and at times frustratingly short. Upon first listening, these eighteen songs felt frantically cobbled together. Initially, this brevity was a turn-off, a gimmick trying too hard to be clever; just as a Beatlesque/Beach Boys groove gets established, a left turn leads directly to an abrupt ending. But upon repeat listens, Half-Handed Cloud might be onto something in a musically-deconstructed-then-spliced-back-together-way. Though still uncertain how I fully feel about this album, I'm intrigued, and I'd go so far as to say I like it for being something different. If you're looking for an entry point, the warbled plinky piano of "Drinking the Water You Walked On" is as good as any place to start, and the quirky "Handles" and jumbled "Periodically Yours" are other highlights. Christian music needs this, and Im glad it exists. Could I listen to it regularly? I just dont know. Ultimately, its fun and uplifting. If you want something youve likely never heard before, and enjoy chamber pop stylings, this could be it. Good luck figuring it out though. Sincerely. For fans of Danielson, Sufjan Stevens, and John Van Deusen. - Review date: 6/16/22, Josh Balogh of Jesusfreakhideout.com