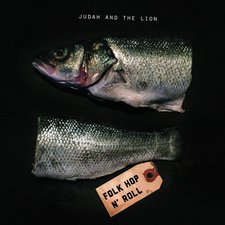 Tennessee's Judah & The Lion's last album (and full-length debut), Kids These Days, was a great piece of folk-rock (that made this critic's top ten list) that fit in easily with the Mumford & Sons / Lumineers school of "old-timey instruments and suspenders," with banjos, mandolins and acoustic guitars filling the spaces between notes. With an appearance on Late Night With David Letterman, a successful tour and a good deal of buzz behind them, Judah & The Lion seem like a band destined to break out in 2016.

Their new album, Folk Hop N' Roll, might get them there, but it will be by taking a wild left turn and traveling the more unlikely route. With (at times) wild layers of sound and distortion and stuttering tempos, Folk Hop N' Roll takes notes from such artists as Radiohead, Animal Collective and Arcade Fire, and weaves a tapestry of sounds and beats that are more spicy gumbo than down-home biscuits and gravy.

Opener "Graffiti Dreams" lays out a statement of purpose similar to Francis Of Assisi's famous prayer. Against layers of guitars and banjo, lead singer Judah Akers quietly intones in a spooky, distorted vocal, "I want to see the world change, I want to build love where there is hate, I want to find in gold in every person, I want to sing about hope in desperate situationsI want to dance where there is only sadness, and bring some peace in the midst of madness." As articulate a statement of purpose as has ever been set to music, Judah & The Lion go on to attempt to get the listener to "dance" and "feel peace" in equal measure.

Second song "Forever, Always" is as odd and heartfelt a love song as you're likely to hear this year, set against an industrial electric guitar line and pulsating beat. But it's the delightfully goofy title track where the band really goes all-in to the dance portion of the record. With acoustic instruments wailing away against a heavy synth line, the band manages to give dance instructions, ala' "Watch Me (Whip / Nae Nae)." Truly a bizarre welding of a club track to a hoedown, this song is both the most head-scratching and brave moment on the album; sort of a wholesome, down-home dance track.

The "Folk-hop" portion of the record is found in "Take It All Back" and "Reputation," with Akers bravely rapping against an organic series of beats. As "Reputation" fades out at the three-minute-and-twenty-one second mark, it's clear that the band is miles away from their folksy debut. "Insane" features some atonal singing and shouting about temptation and "fighting the devil most days." The best line here, "I don't struggle with the bottle, but I understand why you do," is a great reminder that every addiction and coping mechanism is universal on some level, and we're all prone to the same struggles.

The following, "Better Man," is the most humble and honest moment on the record, with Akers singing over a gentle, Lorde-style beat and acoustic guitar line about just wanting to be a "better man as I go along" and letting "the Lord's grace rain on his carnal skin". Moments like this show a range of themes and emotions, and help to balance out the silliness that ends the record in songs "We Own The Night" and "Uh-huh, Yeah," two more dance numbers that bring the funk, and dance the record to a close with themes of togetherness and community (which is perhaps one of the most attractive draws of a dance club).

Folk Hop N' Roll is a wild ride, and a huge change in direction for this young band. But, somehow, it feels relevant and timely for the generation it is aiming for; one that wants to both dance and ask bigger questions at the same time.

For what is ostensibly a catchy pop-inclined album, Folk Hop N' Roll is surprisingly not very accessible at first blush. It takes a few spins to figure out what the boys of Judah & The Lion are trying to do here, but after that initial bit of culture shock, the album really comes together. Of course, the title itself provides a lot of insight into the musical ambition of the album, although at its heart this is still a rock n' roll record more than anything else. There's a fun tongue-in-cheek attitude to the music, especially in the weirdly rap-like "Reputation," but it doesn't totally overshadow the more serious and reflective moments, such as the heartfelt love song "Forever, Always," or the introspective slow-burn of "Better Man." The extent to which this band has managed to mesh the three genres referenced in the album title is impressive, and it provides a welcome stylistic diversity to the album and also saves the band from merely languishing away on the declining side of the indie-folk fad that was once so popular. Folk Hop N' Roll is fun, creative, and just deep enough to be taken seriously. - Review date: 3/10/16, Timothy Estabrooks

Judah and the Lion have made a quick mark on the industry with their modern Americana and folk blend. The group started as a worship band, but have morphed into something else over the years. Their previous album, Kids These Days, was a spectacular addition to the growing market the genre is now holding. Songs like "Kickin' da Leaves," "Twenty-Somethings," and "Rich Kids" led the way. The group's newest effort, Folk Hop N' Roll takes the music in a completely different direction. The album seems to be their take on a fun dance-type sound with some Americana and folk instruments injected in occasionally, but honestly gets stripped of all of the charm that made them such a force previously. For one who became a big fan last year, this album is rather disappointing. - 2/29/16, Michael Weaver of Jesusfreakhideout.com

In this over-saturated music industry, it seems less and less common to encounter an artist that blazes their own trail. With a signature blend of folk, rock, pop and hip-hop, Judah & The Lion is indeed a rare breed, displaying a tangible sense of love for music--especially on the catchy "Folk-Hop Sound" and the ridiculously cheesy 90's hip-hop track, "Reputation." They balance this playtime with substance, declaring their desire to be a beacon of hope ("Graffitti Dreams") and expressing common insecurities ("Insane"). Undoubtedly their best work to date, Folk Hop N' Roll finds Judah & the Lion more poised than ever to make a big impact. - 3/1/16, Christopher Smith of Jesusfreakhideout.com