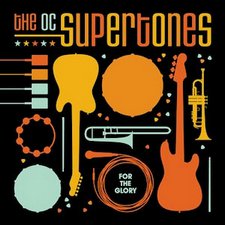 The O.C. Supertones
For The Glory

"I'm gonna do three things: preach the Gospel, reach your heart, and SKA SKA SKA SKA!" Those words of old from the late 90s are apparently - unexpectedly - still relevant today, as Christian music's favorite ska band has made a triumphant return. The O.C. Supertones are back and skankin' away once more with BEC Recordings and their first studio album since 2005, the fun-filled and worshipful album For the Glory.

Undoubtedly, there are some things that are probably on some fans' minds that are in need of answers. Are The 'Tones rusty? Does this sound more like their early stuff or their later stuff? If Ethan Luck is playing drums for Relient K now, who is playing guitar for The Supertones?! They're all fair questions, and they all have good answers, so you can set your mind at ease. The twelve tracks on For the Glory feel like the band never even broke up, while at the same time, they're taking it back to their roots. They promised an album closer to the sound of Supertones Strike Back, and they delivered. Although For the Glory is clearly also aimed at modern music fans as well, it's something that Supertones loyalists and ska fanatics will be able to enjoy just as well (if not, maybe a little bit more). As for the guitars, they have been provided by former PAX217 member, Josh Auer. Though PAX guitarist Jesse Craig had been the live show guitarist, Josh Auer took the reins for the album, and he fits in perfectly (not too surprisingly, as PAX217 had some ska and reggae influence in their music as well).

One thing The Supertones were known for was having an energetic and catchy opening track for their albums, like "Adonai" and "Escape From Reason." This time around, "All The Way Alive" fits the bill and fits it well. Matt "Mojo" Morginsky's signature, in-your-face raps sound as good as ever here, as he has a little fun ("This beat is rude, you should ask for an apology") and also reminds the listener why they've always existed as a band ("We do it for the love, we do it for the Lord, we do it for the people cause they want some MORE! We do it for the fame of the Most High, so come on inside and get all the way ALIVE!"). The following track, and first single, is the album's title track, and further confirms their purpose for The Supertones. The hook is catchy, but also could fit really well on AC radio, as Mojo sings, "Our purpose, our mission is to say that this is for the glory of God, this is for the risen King, who conquered death and hell, that's a story we must tell, this is for the glory." It has some rock & roll aspects a la Hi-Fi Revival, along with scores of "whoa-oa" gang vocals, provided in part by some Kickstarter backer fans. The band has no shame in their purpose of glorifying God; sometimes it's directly worshipping Him and sometimes it's showing love to others through their lyrics.

"Far More Beautiful" is a slower track that is designed as an encouragement to some people in Mojo's life. The music provides a heartwarming atmosphere as Mojo sings to three important ladies, which includes a sweet message to his mother: "Mother, you're still a pretty girl, your arms surround the world with your embrace, Mother, I see your wisdom, your tears and laughter in the lines in your lovely face, and your children one by one, will rise up to call you blessed, all of Heaven will applaud as you enter into your rest." Two more slower tracks made their way onto For The Glory; "Warmth of the Sun" is a ballad that has the ability to transport you mentally to a nice beach, as Mojo celebrates the end of a dark time in life. Then there's "The Wise and the Fool," which ultimately sounds like some sort of cross between island reggae and mariachi music. Lyrically, it pulls from different parts of the Bible, such as Joshua 24 ("As for me and my house, we will serve the Lord") as well as various parts of the Psalms that reference the good and the wicked.

I mentioned that the album has some of the band's Hi-Fi Revival album leanings, which wasn't so much a ska album as a ska-based rock & roll album. For the Glory does have a little bit of rock essence, such as the driving guitars in "It's A Good Day To Be From California" and "Pretty Little Lie," but for the Supertones fans wanting something to perhaps mindlessly skank around to, there's plenty of that as well. You've got opportunities to do that in "Hey Hey Hey," "Down To The River," and "On the Downbeat," while "All The Way Alive," "All Glory," and "Fight On" expertly blend the best of both worlds.

As The Supertones' initial career began winding down, the band began to stray away from true ska music, meandering toward a ska-based alternative or rock & roll sound. Diehard fans kept following the band, but anxiously awaited another album closer in sound to The Adventures of the Orange County Supertones or Supertones Strike Back. When The O.C. Supertones announced their Kickstarter campaign earlier in 2012, complete with a brand new single that sounded more like authentic ska ("On the Downbeat"), it was no surprise that their campaign was funded. The Supertones have a strong discography, but For the Glory is the album that some fans have been waiting for. Put your skankin' shoes on and pick up a copy. class="coversize" align=right> Early Thoughts...
One of Christian music's favorite ska bands is finally back with a brand new album after a seven-year hiatus. For The Glory is a return to form for The O.C. Supertones, who began to drift further and further from the traditional sounds of ska over the years. Now, after a Kickstarter and a return to BEC Recordings, The O.C. Supertones (with new guitarist Josh Auer, former bassist of PAX217) are kicking their reformed career off right. Songs like "All The Way Alive," "Hey Hey Hey," "Down To The River," "It's A Good Day To Be From California," and "Fight On" harken back to these days of Supertones Strike Back; these songs and others make you want to get up and skank ("This beat is rude, you should ask for an apology"), while giving you something that's both glorifying and fun-filled. After all, that's what The Supertones do best. The guys still bring some of the aggression that was evident on Loud and Clear and, in smaller fashion, Hi-Fi Revival, but it's in less abundance. In addition to the legitimate ska, they also bring out some slower reggae in "Far More Beautiful" and "Warmth of the Sun," and an almost mariachi-type sound in "The Wise and the Fool," which also features several vocal layers that expertly emphasize the harmonic aspect of the song. And speaking of vocal layers, For The Glory is also ripe with gang vocals, which were provided by several lucky fans who pledged to the band's Kickstarter (getting to do gang vocals was one of the higher-dollar pledge rewards, and they got their money's worth, getting to appear on several tracks, including "For The Glory," "All Glory" and "Fight On." In the end, this is a very worthy album for the ears of fans who have been waiting for it. It's not their best album, but it's a terrific return, and it really feels like they haven't missed a step. It's truly great to have The Supertones back... --->