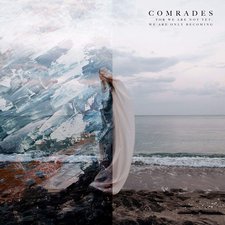 Comrades
For We Are Not yet, We Are Only Becoming


Back in 2016, Comrades released their first album on Facedown Records, and it was a good one. Lone/Grey was a unique blend of post-hardcore and melodic indie rock which was finely and effectively executed, and the final result was a memorable and extremely enjoyable album that showed a bright future for the band. Since their formation in 2008, the trio had consisted of husband and wife Laura and Joe McElroy, along with drummer and unclean vocalist Ben Trussell. However, the year after Lone/Grey's release, Trussell parted ways with the band. His replacement was John Gaskill, a longtime veteran of bands like Life In Your Way, Endeavor, and Converyor. With a tweaked lineup and lots of positive momentum from their first Facedown release, how does For We Are Not Yet, We Are Only Becoming compare?

Upon first listen to For We Are Not Yet, it seemed that something was missing that had been captured beautifully on Lone/Grey, but it was hard to put my finger on it. All of the things which had made Lone/Grey such a successful outing were still there: Laura's airy and pretty vocals, countered and balanced with crisp and effective screams (only they are Gaskill's screams rather than Trussell's), laid over ambient and mysterious tones with some solid breakdowns and excellent technical skills. But it didn't end up being a very engaging listen, and the lyrics, though a gauntlet of fascinating poetry and imagery that could be very touching if the time is spent to really delve into them, are certainly vague and don't offer much surface substance for a more casual listener. Subsequent listens continued to lack engagement and fail to make anything really stand out, and it was a challenge to make it through to the end of the album on nearly every listen.

I must be perfectly frank in my evaluation of this album and say that never in my time of reviewing music has an album stumped me as much as this one. All the pieces seem to be in place to make an album that is just as good, if not even better, than Lone/Grey, but I enjoy it far less. The impressions that I get from this album, whether true or not, are that the melodies are less memorable, the music is less diverse, the breakdowns are less edgy, the lyrics are less singable, and the screams are less intense. In reality, it's possible that none of that is true, and the only real sin this album commits is following too similar a formula as Lone/Grey, making it seem more stale by comparison (which is absolutely the case and a valid critique). That said, For We Are Not is not self-derivative in the way that bands like Skillet or artists like NF are self-derivative (if you'll excuse my blurring of genre lines) in that they've developed a niche for themselves and they never stray far from it. Rather, it's derivitive in the sense that like they liberally borrow and combine elements from other varieties of music and meld them to form "their" sound. It's true that there is no other band I know of that sounds quite like Comrades, but there are a lot of bands that I can think of that elements of Comrades' music remind me of.

The only real conclusion that I can make from this album is that it wasn't for me, or at least it wasn't for me in the way that Lone/Grey was. I can't vouch for or heartily endorse For We Are Not Yet, but that doesn't mean I don't think it isn't worth the time of Comrade fans, or anyone else really for that matter. Perhaps if I had never heard Lone/Grey, I would be able to appreciate this album more. It's also very possible that this could be an album that ages well, and with passing time and a potential return, I'll discover more that I hadn't noticed before. The sound and style is truly rich and well-executed, and there is always potential for such albums to connect with listeners in a way that it didn't connect with this one.

Comrades came out of the gate strong with their Facedown Records debut, taking up residence in the heart of music lovers with a taste for melodic post-hardcore. These same fans are finally getting the follow-up theyve been longing for in For We Are Not Yet, We Are Only Becoming. Unfortunately, the album wears out its welcome very quickly. Fault Lines draws the listener in with a solid opener, but the albums progression is hardly any progress at all. Song after song goes by while I attempt to find something of interest and end up unsuccessful. Its especially disappointing because theres nothing particularly bad about it; all the components are fine--from the musicianship to the incredible screaming--but the sum of the parts just doesnt hold up. Comrades is a band of extremely talented musicians and vocalists, but the songwriting just leaves me wanting so much more. All that being said, if youre a Comrades fan, whether youll end up agreeing with me or not, youll want to give this a listen. Heres hoping that you find a lot more enjoyment in this album than I did. - Review date: 6/6/19, Scott Fryberger of Jesusfreakhideout.com