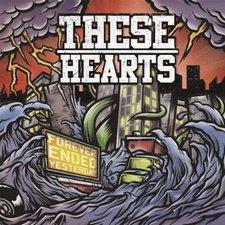 Christian music has been thriving within secular labels for years now and Victory Records has been home to several of these bands; the newest kids on the block are These Hearts. The young men from Fargo enter the scene with their debut album, Forever Ended Yesterday. The release features typical Victory Records screamo and album artwork. The biggest catch here is that it has all been done before and has been done much better.

The album starts off well enough with a solid pop-punk sound along the lines of a band like New Found Glory, but the album goes quickly downhill from there. It doesn't take long for the singer's high-pitched vocals to start grating on your nerves. When singing normally, the vocal pitch is bearable, but the forced vocals and higher notes are likely to make the listener cringe. The next thing to kick in is the hardcore/screamo riffs and screaming. This isn't particularly terrible sounding, but it's exactly like what you'll hear from almost every other Victory band.

Though it is a painful thing to say about a band that is playing music for Jesus, this was a hard album to listen to from start to finish. Again, it's not dreadful music, but it's just been done repeatedly before. Though the music is fairly solid, it just continues chugging along throughout the album without much creativity added in. In addition, most of the group vocals sung throughout the songs seem halfhearted and poorly mixed.

The lyrical content is pretty much about teenage life and love and at times is weak, as evident in the somewhat cheesy, acoustic driven love song "Thinking in Terms of Two." The strongest track on the album, both lyrically and musically, is "Romans 15." The song deals with the subject matter from that passage of scripture: Self-denial on behalf of others. The scripture says, "Now we who are strong ought to bear witnesses of those without strength and not just please ourselves" (NASB).

Overall, Forever Ended Yesterday shines most with the pop-punk sound where the nasally vocals seem to blend better. Some people may not agree with this assessment of one of Victory's newest artists, but this album is what it is. If you are looking to Victory Records to get your Christian music fix, you may want to try Corpus Christi instead. If you are a fan of screamo and/or Victory Records, this may still be worth a listen, but there are several better alternatives. Hopefully this Minnesota quintet can learn, grow, and put out a much better product next time around.

The musical sound of screamo/pop seems to be making more and more of a presence in the music industry lately. The combination of high, piercing vocals and throat-wrenching growls can actually make a good sound when done properly. These Hearts is a perfect example of that type of sound and their new album Forever Ended Yesterday speaks mostly on looking up no matter what hardship you're dealing with.

The album has a handful of both highlights and lowlights. Many of the tracks detail the boy/girl relationship - emotional and filled with ups and downs - while profiling some good musical backgrounds of double bass and heavy guitar strings. "Denial Is Not Just A River In Egypt" and "She'd Like To Wear The Pants..." both carry that same relationship vibe, but the former has a more clear production while the latter has less lyrical depth, aspects that showcase a distinct difference in the two. That seems to happen throughout the album; some songs are done really well, like "Live To The Point Of Tears" and "Dime A Dozen," while others, like "Romans 15" for example, come off as a muddled garage band sound.

All in all, there is enough positive to expect more in the future from this young band and I hope that they'll keep cranking out the solid tunes that I know they're able to write. - Kevin Hoskins, 7/5/11