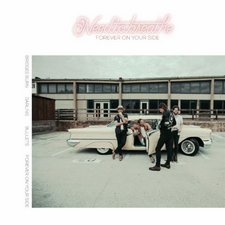 NEEDTOBREATHE
Forever On Your Side (Niles City Sound Sessions)


NEEDTOBREATHE has been churning out music regularly since 2006, when their first major label release, Daylight, hit the market. In 2018, they are now six full-length albums and various EPs into their career with a great track record of high quality with each new release. With the 2016 album H A R D L O V E, the band leaned into modern synthesizers, mixing them with the southern rock/alternative sound they have made their career on. It was a needed artistic step, but it left some longtime fans frustrated. It took this reviewer time to warm to it, but H A R D L O V E eventually won me over with some of the tightest songs they had written up to that point. That brings us to the Forever On Your Side (Niles City Sound Sessions) EP, which continues sonically along the path started by H A R D L O V E and the Hard Cuts EP from last year. If youre looking for more of the roaring rock of The Reckoning and The Outsiders, then these four songs may leave you wanting. However, if this newer sound works for you, there are some nice introspective moments to enjoy.

Bridges Burn is a good (albeit subdued) way to kick off the EP, and takes top honors for this reviewer's favorite song. It feels like the most comfortable of these four to fit right at home with the H A R D L O V E era. A mid-tempo piano leads as the music simmers, and Bear Rinehart wails the lyrics, I wanna watch all my bridges burn/Stand in the rain 'til the/page is turned/Dance in the light of a lesson/learned, lesson learned/I wanna leave everything that hurts. There is something charming about the earnestness of second track Darling, as Bear croons road weary lines to his wife, Darling, won't you talk with me for a little while?/We ain't got nowhere to be/Oh and I've come so many miles/Darlin', won't you talk with me for a little while?/Or at least until the baby cries/Or we both fall asleep. He acknowledges that the excitement of playing shows for strangers pales in comparison to being home with his family. Later in the song, he recognizes that his wife struggles with aloneness too, as she is at home raising kids and managing the house with him gone much of the time. It's a sweet and well-executed sentiment.

Bullets treats the listener to some rock swagger, as horns and organ are high in the mix musically as we are lyrically reminded that, Oh, some things can't be undone/Some bullets that you chose/Can't go back in the gun. This song fits right in thematically with the others as Rinehart seems to be in a place of relational reflection. We would do well to heed the warning of speaking before we think as he seems to be warning us against this from personal experience. Closing track Forever on Your Side had this reviewer most excited, as it was the only previously unheard song prior to the EP release date. The thought of husband and wife duo Johnnyswim joining the NEEDTOBREATHE boys had these ears eager to hear the possibilities. Alas, these high expectations went unmet, as the song fell somewhat flat. Musically, it doesnt really go anywhere, and lyrically though true, becomes repetitive. Although not a bad song by any stretch, it seems as though what probably works well in a live concert setting loses its magic on this recording. One last minor criticism of the EP as a whole is that many of the lyrical themes had been previously explored. However, this is the smallest of gripes as they are things we as listeners could benefit from hearing regularly.

All things told, the Forever On Your Side EP is a solid (and too short) addition to the NEEDTOBREATHE catalogue, that serves to hold fans over until their next full-length offering. That being said, hopefully the next full-length album brings back more of the southern fried rock n roll and some fresh lyrical ideas and themes, though if they continue to write fantastic songs, fans will be hard pressed to pass on anything they produce. This one is a definite must-own for fans of anything the band releases, and at least a must-hear for nominal fans of the bands discography.