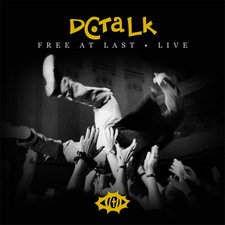 
Is there anything left to say about DC Talk's 1992 album Free at Last that hasn't been said so many times before? Its status as maybe the greatest youth group fixture of the early 1990s is well-earned, with its relentlessly funky and positive hip-hop sound, soulful crooning from Michael Tait and Kevin (Max) Smith, and endlessly catchy raps from TobyMac himself. Though the highest heights of stardom for the trio would come with 1995's much more serious and reflective Jesus Freak, the Free at Last era was nothing but fun. The fun that translated to a live setting has never been properly captured; 2002's long awaited release of Free At Last: The Movie was more of a documentary (and an unfinished one at that) with the concert footage only a backdrop. While a true live album from this era would have been a nice addition to the discography, we all expected that status quo to remain indefinitely... until the sudden and unannounced release this month of Free at Last (Live), which I suppose should best be described as a live album 27 years in the making.

I'm not sure how to further explain the joyous energy of Free at Last to someone who wasn't there to experience it in the 1990s, so if your response is "There was a DC Talk album before Jesus Freak?," you probably have to take my word for it that, while the most popular secular rap was in a deep hole of depravity and violence, there was nothing cooler in church than being "d-d-down with the DC Talk." So having established that, yes, these are in fact great songs in their original studio format, the most important aspect of a live album (and one that is frequently missed) is that it actually sounds good, and that is thankfully the case here. The album is mixed very well with all instruments and vocals crisp and distinct, especially the excellent deep bass guitar (played by Otto Price, in his first year as the band's musical director) and Toby's consistently energetic and effortless audience interplay, and the excited crowd noise adding some punch without overwhelming the mix. Though it's not clear how many different performances are stitched together here, references are made to San Jose, Detroit, and Ohio, so it's quite a patchwork of dates from the 1994 Free at Last Tour -- the first headline tour of DC Talk's career.

However, it's not always a seamless patch, which is most evident at the abrupt end of Nu Thang track "Walls," which initially starts off with a bang by introducing Audio Adrenaline's outstanding original guitarist, Barry Blair (Audio A, touring to support Don't Censor Me, was the opener for this tour). The limited setlist records from this tour show that "Walls" was the first part of a medley with "Time Is," but instead after Blair gets a nice-but-brief wailing spotlight solo two and a half minutes in, the track suddenly cuts off and fades into the beginning of "Lean on Me." As a result, the rocking "Time Is" is the only Free At Last track not represented on this live album. The mid-show acoustic set features a great unplugged version of "The Hardway," as well as Larry Norman cover "I Wish We'd All Been Ready," which leads into what feels like a slightly unnecessary cover of U2's "40" that ends up exceeding ten minutes, including Toby's lengthy introduction. It's the only real dull point of an otherwise very entertaining concert. Those who were fans even before this era will be excited to hear a "Things of This World / Children Can Live (Without It)" medley from Nu Thang, as well as "Heavenbound" from the 1989 self-titled debut.

Now, if you have questions about why exactly this is being released right now, you're not alone. In fact, the album's press announcement from the record label appears equally confused, referring to the release as a celebration of the 25th anniversary of the recording, which is actually a reference to the 1996 Jesus Freak tour that eventually became Welcome to the Freak Show. To attempt to clear things up, JFH reached out to the label who confirmed with management that the recording is actually from a couple dates in April in 1994 (Which makes a lot more sense, historically). Regardless, the album doesn't appear to be an actual attempt to promote anything, either; it's not as though we're any closer to the actual DC Talk reunion that so many of us want to see -- and did any of the three members even know this was coming out?

All told, it feels like one of the more eyebrow-raising and confusing releases in recent memory, and it's hard to put that completely aside at first--but pretty soon, if you feel that way, you'll realize you probably need to spend less time thinking about it, and more time just listening to it. I never had the chance to see DC Talk live pre-Jesus Freak, but I was delighted to find that I still remember every word of every rap from Free at Last and I really don't need any reason or special anniversary event to celebrate the energy of modern Christian music's most famous trio, all still under the age of 30, near peak form for 70 minutes singing this timeless setlist of high-energy classics. Word 2 the Father, indeed.