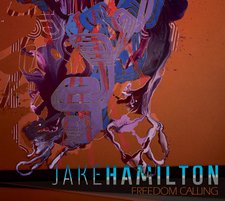 If music is what can unite the world surely worship music should be what unites the church. Amazingly enough there are so many "new" worship artists and psalmists coming out of the woodwork weekly. Some sound completely unoriginal and as cliché as they come. Others have created something truly amazing and seem to come straight from the throne room of Heaven! And then there's another batch: the ones that just make you say, "What in the world was that?" With the new live album release from Jake Hamilton, Freedom Calling, that's exactly the reaction that comes to mind.

The album opens with the extremely long opening track "War Drums." I won't sugar coat it; after the first 8 minutes it's hard to stay attentive. In addition to that, Hamilton's gritty yell, which dances on the line of screaming, makes the whole experience a rather trying one (Plus it turns into something like a military sound off). This might have actually been a very powerful track if it had been placed later in the album. Sadly, this transitions to the even longer track, "New Song." Topping out at a whopping 13 minutes and 5 seconds, it just is taxing to listen to. A large portion of the song is actually a spoken word poem that is meant to be an encouragement to the worshipers to be the counter culture, and while it says some great things it just goes on too long for an album. Twenty-three minutes into the album and I haven't even passed the second song (but hey, Galatians 5:22).

"Supernatural Revolution" is the first real glimpse of something with some sustenance, with a great groove and funk to it. The gritty vocals are still hard to accept but the idea of worship music with a Credence Clearwater Revival flair make it something so different and the honest lyrics make it a great track, as Hamilton sings, "What good is love if you don't give that love away." The song carries a strong conviction and an originality that is rare to come by. This trend thankfully continues on "Take It All" and "Looking For One." These songs really are about the great surrender that the Christ follower should put to work in their life.

A great stand out of the album is "It's A Garden," and believe it or not, it's another track nearing 10 minutes! What this song offers that its predecessors did not effectively translate clearly was a strong point and good vocals. Hamilton points to the beautiful Biblical truth that creation began in a garden and will end in a garden. It also features a very intimate instrumental section. Is it still too long? Yes, but this one has impact.

Other decent tracks on the album are the title track, "Freedom Calling," and the cover of the famous "Hallelujah." His tone on a few of these tracks is very beautiful and I have to give him credit for having a very different vocal sound. However, most of the songs suffer from the same defects: overly verbose lyrics, way too much minor key, and vocals that can become difficult to listen to.

I have said it before and will say it again that live albums are difficult to swallow, and for two reasons: 1. Listeners are not there, thus we can't really share in that anointed experience of unified praise. 2. The crowds can be very obnoxious (The random crowd kid yelling "Jesus!" or "Yeah!!!"). I know people are excited to worship but it becomes more of a distraction. I won't say this album is a complete flop, but I will say that it's not easy to digest and won't appeal to everyone. If you like very charismatic and aggressive worship, this is right up your alley but if that's not really your thing, you might just be left asking, "What in the world was that?"

Jesus Culture has quickly come in and made a name for themselves as somewhat of an American version of Hillsong. Having slightly better songwriting to their names, they're very similar musically, with standard anthemic guitar lines, mediocre and recycled lyrics, and long, droning ballads. They released their latest album, Come Away, this past November to both critical acclaim and critical disdain. Six months later, Jesus Culture's guitarist Jake Hamilton now has his own solo album called Freedom Calling. One of the first things you may notice is that the production value is a bit lower than expected. At some points, the volume seems really turned down on some of the guitars or vocals. It takes a lot away from the listening experience. Hamilton is also very lyrically repetitive. Even in the tracks that aren't in the neighborhood of ten minutes, he spends a LOT of time repeating himself. Throughout most of Freedom Calling, Hamilton's voice feels very forced and unnatural. To give you an idea of what his voice sounds like, take Dave Grohl from the Foo Fighters and mix it up with a dose of James Hetfield from Metallica. The music is rock-based, with hints of southern rock along the lines of a lower-quality Third Day. Hamilton, on his own, is definitely more inclined to rock music, with a gravelly voice and some yelling throughout the album, but the music rarely matches the intensity of his vocals. Not sure if the mixing was just done poorly, or if his band failed to realize that if he was going to turn up his vocals, they needed to crank out some harder music. Either way, the music is very lacking (though I did like the smooth bassline near the end of "Take It All," and they were able to kick it up a notch in "Breakout"). I have to give Hamilton some credit when it comes to creativity. It's not outright creative, but he at least makes attempts at other styles of music that you don't get from Jesus Culture. Of course, that can only carry him so far, as the music he mostly goes to other than Jesus Culture style is along the lines of Jeremy Camp. In the end, I think I would rather listen to Hamilton's album than another Jesus Culture album, but in a world where we have worship bands like David Crowder*Band and The Ember Days, Freedom Calling would probably be one of the last worship albums I'd listen to. - Scott Fryberger, 5/12/11