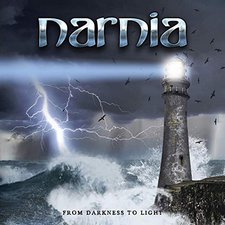 Narnia
From Darkness to Light


If Stryper and Petra got together and had a Swedish power metal baby, that "child" would look like Narnia. Originally getting their start in the late '90s, the band took a break in the late 2000s and returned in 2014. Since then, they've released a self-titled album and now From Darkness to Light, a ten-track adrenaline rush of bombastic guitars, pounding drums, thumping bass, '80s synth, and searing vocals. The production level is smooth and showcases the band's musical prowess nicely, while the lyrics give very blunt proclamations of the gospel to any who will listen.

Musically, Narnia keeps things rocking throughout with just enough quiet moments, in songs like "The War That Tore the Land" and the title track (which is curiously split into two parts), to keep things from feeling too frenetic. The musical aspects of this album are its high points and I often catch myself grinning stupidly during certain jam sessions or keyboard riffs. Narnia knows its brand and knows that's what draws listeners in, so they double down on that to satisfying effect. There are times when a solo goes on longer than needed or pops up suddenly when a song could end but such is the territory.

The messages found here all center around the gospel, but contain enough variety to avoid becoming repetitive. Going against most trends, the record opens with "A Crack in the Sky," which heralds Christ's return (most artists would put that as the closer, but I'm not complaining). Other songs are more directly worshipful ("You Are the Air That I Breathe," "I Will Follow," and even the epic "The War That Tore the Land"), some focus on encouragement in the Christian life ("The Armor of God," "MNFST," and "Sail On"), and a couple give testimony to life before/without Christ ("Has the River Run Dry" and the title track). Though most of the songs are melodic enough for the lyrics to work, there are times when the rhyme and meter are off and are less enjoyable to take in. Multiple listens tend to smooth most of those bumps over, however.

I had given Narnia cursory listens in the past but decided on giving a full-length album a shot. There are aspects of power metal in general that one may find grating or cheesy, but that also gives it some of its charm. From Darkness to Light certainly has that charisma. It's a well-executed rock album that you can jam to and be encouraged. It may seem theatrical or melodramatic at times, but these guys know what they're doing and find the balance between bombast and spiritual sincerity. The style may not be for some, but if you're looking for a good metal album to rock to, Narnia's From Darkness to Light is worth a listen.