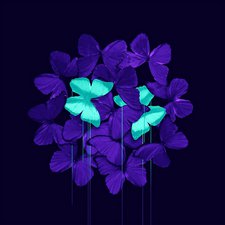 
The last couple of years have seen some tremendous growth for the Solid State family. Joining the ranks of newer signings like Empty, Azusa, and Mantric is Lightworker, a melodic metalcore band from Northern California. They signed to Solid State after the label caught wind of their Resilience EP, and they immediately began working on new music.

Their major label debut is called Fury By Failure, an ten-track album packed with loads of well-made metalcore (fun fact: several of the songs' instrumentals were co-written by Daniel Gailey of Becoming the Archetype). It opens with two back-to-back, fiery singles, "Empyre" and "The Willing Martyr," which bring bands like Killswitch Engage to mind, as they blend furious riffs and intense screams with a terrific sense of melody. "Remove the Earth" takes the riffing and double bass and wonderfully mixes them with verses that are mostly sung and with only minimal screaming. Vocalist Joe Calderon's clean vocals are as impressive as his screams, moving between silky smooth singing and gruffer, raspier vocals (the latter of which is more prevalent in "Remove the Earth"). And this isn't the only song that favors clean vocals over screaming; "10/18" and "Beyond the Pale" are also excellent hard rock tracks that keep it heavy musically while keeping it clean vocally.

The members of Lightworker are not all Christians, so none of the songs are outright religious or evangelical, but Calderon's faith definitely does influence the lyrical direction of the band. "The Willing Martyr" is a great example: "You ripped the trust from nameless hands / made me believe there's no way out / tell the truth and say it to my face / in the dark I found a voice / tore off the veil and made a choice / now I've found the key to be set free." But even when the lyrics don't necessarily have a Christian undertone, the songs keep a positive attitude through the darkness and despair of the world, like in "Words Dissolve." Co-written by Ryan Kirby of Fit For A King, the song seems to be encouragement to a loved one fighting a battle: "I accept the bitter truth / from the shadows of our thoughts / but you're numb to the reality / I know that you're driven by demons to prove something / but I'm driven by angels to reveal your worth."

Overall, Fury By Failure is a rather impressive major label debut, and definitely an album that gets better with each listen. For me, personally, it's pretty rare these days to find a melodic metalcore album that leaves an impression on me, but that's what Lightworker has done. I'll be spending a lot of time on this one and will be looking forward to what they have in store for the future.