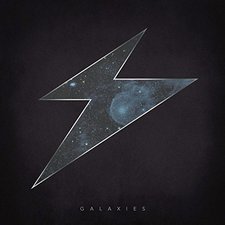 
When the David Crowder*Band split in 2012, the *Band wasn't quite done making music together, resulting with The Digital Age, some stellar EPs of cover songs, and a great debut album in Evening:Morning. But everything they had made still carried the same vibe as the DC*B, and I wonder if Mike D, Jack Parker, Mark Waldrop and B-Wack felt the need to carve out a niche of their own that they could identify and listeners could identify them not as "they guys who used to be in the David Crowder*Band," but instead who they are now, "The Digital Age." With Galaxies, an astro-themed semi-concept worship album, the band makes an ambitious attempt to own their sound and forge their musical identity as a collective.

"I Can See It Coming" opens with an intriguing and engaging monologue and lyrical intro set to an almost Church Music-like backdrop. It is a start that begins to deliver on the promise of that astro-concept. "One Pursuit" is the first real worship song, and while it does continue that same vibe, the hints of commercial familiarity (think Imagine Dragons) detract slightly from its full potential (it is a very good song, otherwise). Unfortunately, "Undivided" begins to move the whole album off its established track and away from its promise for a unique astro-worship experience, as you might expect to hear a similar song on any average worship album that has been released in recent years (though perhaps with more special effects, such as an interesting use of autotune). "I Belong" falls more or less in the same category, only at a lower tempo. By the time the "from a great distance" interlude comes on to remind listeners that this is supposed to be an astro-worship experience, the overarching problem with this album has become pretty clear; the songs designed for more commercial appeal, and the songs designed to "feed the experience," so to speak, simply don't gel. Instead of a true experience as the band had intended, we get a jarring collection that exaggerates the album's flaws and diminishes its strengths. Not even the fact that the majority of the songs on the album lyrically explore the idea of joy can bring the album back into cohesive unity.

The places where Galaxies does shine are when they find the right balance between the two. "How Sweet It Is" is the album's unequivocal highlight and one of the better songs to be released in 2016, thanks to its retro synths, hallow echos, and fun use of autotune (though it does remind this reviewer quite a bit of Phil Wickham's "This Is Amazing Grace"). If the more commercial songs on the album had been more similar stylistically to "How Sweet It Is," I think the experience would have been a lot stronger. Also, the second half is much more cohesive than the first, though that is more thanks to the string of more stripped back, acoustic songs than its commitment to the originally-promised concept. But by the time the final three songs come around, TDA finally has comfortably settled into the vibe that they were going for the whole time; worshipful, atmospheric contemporary pop that brings images of space and the sky to mind.

What I can hear and feel in Galaxies is a band that is searching a bit for a new identity. There are some risks and creative choices taken that definitely work, and some that don't. But the times when it is really dragged down are when the band elects to make safe, accessible musical choices rather than ones that add to the intended experience. I can admire an album like this, but it surprises me that these types of creative missteps can come from the same people who made Church Music. Galaxies is without a doubt a worthy listen, and worship fans (plus most of the fans who have loved their previous material) should definitely enjoy it (and will enjoy many songs from it). But it is also probably the most troubled album these four particular musicians have made together. - 11/2/16, Mark Rice of Jesusfreakhideout.com

The Digital Age hasn't made much noise in the past couple of years since their last release, 2014's Rehearsals, Vol. 2 EP. Then all of a sudden, here they are again with a brand new full-length album. Galaxies is a bold endeavor, mixing a bit of a "concept album" aspect with a surprisingly accessible sound. Evening:Morning was by no means a completely original project, but TDA seems to have really jumped headfirst into the radio friendly world of Christian pop rock, despite the promising "I Can See It's Coming..." intro. There's not a lot that really draws me back in to this album, though there are some enjoyable moments, such as "How Sweet It Is" and the Imagine Dragons-esque "One Pursuit" (though it does sound a little too much like ID's "Demons"). Other than their Rehearsals EPs, The Digital Age has proven to be of little interest to my ears, and unfortunately, Galaxies does nothing to change that. - 10/31/16, Scott Fryberger of Jesusfreakhideout.com