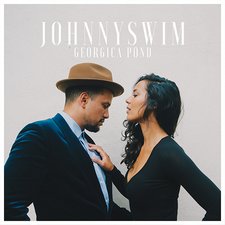 
There are few concepts in the singer-songwriter world that have grown more tired than romance. Most love songs suffer from being the exact opposite of what they should be: uninspiringly generalized. So admittedly, a Southern pop group attempting to tell a "love story for every age" for an entire hour doesn't sound appealing, but that's what makes JOHNNYSWIM's Georgica Pond special. Husband and wife duo Amanda and Abner Ramirez take their time crafting a mature love story that comes across as emotionally and sometimes painfully genuine.

The vocal chemistry between Amanda and Abner is half of the glue that cements the authenticity of their narrative. Abner's soulfully smooth approach and Amanda's raspy rawness may be stock for male and female folk/pop singers nowadays, but their voices are unique enough to be memorable on their own and often magical when combined. Amanda and Abner easily switch between melodies and harmonies, sometimes within the same verse (such as during the chorus of "Hummingbird"). These passages are captivatingly dynamic, but they do detract from songs like "Let It Matter" that feature only one vocalist.

The other half of the glue that makes Georgica Pond really work is the focus on overlooked aspects of romantic love. "Summertime Romance" playfully explores the honeymoon phase, "Villains" admits that we mentally turn our partners into enemies, "Let It Matter" implores the listener to allow heartbreak to happen when it needs to, and so on. These topics flow as though the listener is going through Abner and Amanda's relationship in real time. This is best exemplified on the two-part tribute to their children in "Touching Heaven" and "Georgica Pond." The former tells of the joy of being with one's kids, whereas the latter laments the end of such an experience. Amanda has noted that "Georgica Pond" is so emotionally tender that she could only perform one vocal take of the entire song. These kind of sentimentally sensitive decisions make most songs on the album feel essential to the makeup of the story.

JOHNNYSWIM is able to draw out the best of their stylistic influences by utilizing the grit of the South and the catchiness of pop to make each song memorable. As a result, acoustic guitars, choirs, and simple time signatures are commonplace throughout the tracklist, which works for the sake of familiarity but also detracts from the scope of where the album ventures musically. "In My Arms" serves as the jazzy exclusion to the predominant genre, which makes it surprising and refreshing. It also helps cheesy lines such as "I'm gonna love you like nobody will/Under the rainbow and over the hill" feel appropriate.

Songs that lean heavily into the pop side of things end up being the weakest tracks on the album. "Villains" and "Drunks" are fairly boring attempts at anthems, only adding to the possibly bloated runtime of 55 minutes. Still, the obvious poppy single, "First Try," is absolutely electric and represents everything that JOHNNYSWIM is. A recognizable chord progression leaves room for infectious vocals to take center stage and display Amanda and Abner's undeniable talent and love for each other.

Generally, there aren't a lot of production risks that are taken, which lets the tight songwriting really come through. One of the production choices that might be confusing for listeners is the "behind-the-scenes" postludes present in the first half of the album. If it continued throughout the album, it might have felt purposeful, but instead, it just feels like they liked some of the laughter and dialogue that happened in between takes and decided to leave them in the final mixes. Even the pretty strings arrangement at the end of "Summertime Romance" doesn't necessarily add anything to the song itself.

Another confusing component of the album is the final track, "Wicked Game." The song introduces an unexpected electronic palette and a strangely melancholic mood. Though a number of other songs let heaviness have its place, this one feels like a morose, odd conclusion to their love story. Fortunately, the album as a whole overcomes the few duds in its 14-song tracklist by maintaining an emotional ebb and flow and agreeable sonic transitions.

The singer/songwriter game is one that could use a revitalization of purpose, and JOHNNYSWIM seems intent on doing just that. The fact that Abner and Amanda created an original love album bodes well for their future and speaks of their culpable magnetism. In writing a "love story for every age," they created something for their potentially decorated discography that won't ever grow old.

If you are looking for a quality smorgasbord of pop, folk, blues, and soul, with a dash of Nashville country for good measure; then look no further than husband and wife duo Johnnyswim. There is much to like about their second, and more subdued full-length offering, Georgica Pond, starting with the breezy song "Summertime Romance." This song is begging to be on everyone's summer playlists and would fit a day by the pool just as well as a road trip up the coast with the windows down. Other highlights, among many, is the quartet of songs starting with the hauntingly beautiful title track, "Georgica Pond," followed by the aching encouragement of "Let it Matter," the playful harmonies of "First Try" and rounded out by the whimsical love song, "In My Arms." Another song worth mentioning due to its cautionary message of the limits of human love is "Rescue You." In it, we hear the husband and wife team taking turns sharing that, "My love can't heal the scars/You carved on your own heart/My love can't/rescue you/The way you want it to/Not the way you want it to." Perhaps this is a nod to the healing power that only the Heavenly Father can accomplish in each of our lives. Lastly, the only song that didn't fully resonate upon repeat listens was the song "Touching Heaven," which is a love song to the couple's young son. The choir that kicks in midway through the song adds a different and welcome element, but the near two-minutes of the refrain "you're my hallelujah" began to wear quickly. All told, this is an excellent album, and one to revisit often for just about any occasion. - Review date: 5/11/17, Josh Balogh