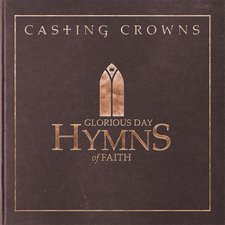 
After the release of Thrive, which incorporated a kind of folk sound into some of the tracks, it made sense that Casting Crowns would release an album tapping into that. Glorious Day: Hymns of Faith represents, at times, some of the best elements Casting Crowns has to offer. It also has some frustrating or even bizarre decisions that make it feel, at best, less than cohesive.

"When We All Get To Heaven" is one of the stronger tracks on the album. Right away it shows a natural fit Castings has with hymns - in particular, the vocal harmonies between Hall and the two female members are great. The violin works well with the light acoustic guitars and kick drum. It doesn't feel like a stretch for the band, but a natural outgrowth. "Nothing But the Blood" is much in the same vein, except with a much more country feel, banjos and all - and once again, it works. "My Jesus I Love Thee" has an interesting arrangement - you have the acoustic instruments, but also an airy guitar line. It's very understated (a good thing here) and almost haunting.

"At Calvary" is the only 'rock' song among the new songs. It's very much your typical Casting Crowns song: a slow opening building to include the whole band. Normally this can get a bit grating over a whole album, but it works well here because it isn't overused. "Sweet Hour of Prayer" is another strong cut; it's also the only one led by the band's female vocalists, mostly just backed by piano and violin. "Beulah Land" follows much in the same vein, but with Hall leading. Hall's vocals work really well for this song. It's not overstated, and doesn't even go to as big of a climax as you'd expect.

With six strong new original songs, this has to be a great record, right? Well, here's the weak part of the record: the lazy incorporation of older Crowns songs. Three songs on the record - "Blessed Redeemer," "I Surrender (All to Jesus)," and "Tis So Sweet to Trust in Jesus" - are hymns the band already recorded. They are solid cuts - not as good as the new material, but passable if you didn't own the records they originally came on.

To make matters worse, there's the out-of-place Crowns studio cuts. Six tracks on this album are brand-new, and six are carried over from other albums. "Glorious Day," "Praise You In This Storm (Acoustic)" and "If We Are the Body (Acoustic)" are glaringly out of place. In theory, "Glorious Day" is a great choice to include. But they didn't re-record it at all to fit the album; it's the same song you hear on the radio, and that's out of place on a mostly downbeat hymns album. "If We Are the Body" isn't a hymn and doesn't really fit musically, and "Praise You In This Storm" is too loud. If you really needed those two or three extra songs to pad the album out, there are far more obvious choices to include - like, say, "Your Love Is Extravagant" from the band's debut album, or "Spirit Wind" from Come to the Well. For a record that runs nearly 50 minutes, there really isn't a lot new here.

There are a lot of strong songs on Glorious Day: Hymns of Faith, but it's rather hard to listen to the entire album, because the songs that are out of place just don't gel with the new material or filler that isn't new and that you probably own already. Unlike Cracker Barrel releases like Steven Curtis Chapman's Deep Roots, this isn't an album. It's a hybrid with six great new songs and a mix of six other songs that aren't new, and half of which don't make any sense in the context of the album. I'd highly recommend taking a look at the new songs, but I can't recommend the album as a whole.