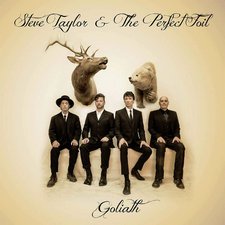 Although twenty years doesn't sound like such a long period of time in the grand scheme of things, it should be noted that, in the year 1994, digital music was still being bought on compact discs, watching a then-current movie involved actually getting into one's automobile and driving to the local theater, Pluto was still a planet, and, perhaps most importantly, fans of the Star Wars franchise still had a full half decade to go before being introduced to the less than universally-loved character of Jar Jar Binks.

1994 was also the year that members of the Steve Taylor fan base sat in eager expectation for a follow-up to his critically-lauded 1993 Squint album. The wait, as most of those same devotees will testify, turned out to be significantly longer than originally anticipated. But even though Taylor spent the rest of the '90s and the entirety of the '00s without a solo effort to his credit, he hardly sat idle. Indeed, if anything, he was busier than ever, starting up the short-lived mainstream rock act, Chagall Guevara; producing and writing lyrics for artists like Sixpence None the Richer, Guardian and The Newsboys; starting his own record label (Squint Entertainment); and embarking a career as a full-time feature film director (The Second Chance, Blue Like Jazz).

Here, though, a full 21 years later, the proverbial long winter of discontent is finally over, as Taylor - backed by guitarist Jimmy Abegg (A Ragamuffin Band), bassist John Mark Painter (Fleming & John) and drummer Peter Furler (Newsboys) - once again steps up to the microphone on what can only be described as one of the freshest breaths of air in recent memory. Indeed, rather than adopting the now-familiar wall of metal that most listeners now associate with the rock genre or the pop/worship favored by virtually every artist on the Inspirational Top 10, Taylor and his like-minded band mates have crafted an effort that, while unmistakably rock-oriented in its demeanor, owes very little to that which is currently popular in the music world today.

The absolutely revitalizing leadoff cut, "Only a Ride," is pure Taylor: passionate vocals, biting lyrical insight, raw guitar riffs and an undeniable swagger that just about any Stones fan would appreciate. The heavily-reverbed guitar work of "Double Negative," on the other hand is blessed with a mesmerizing rockabilly-by-way-of-Duane-Eddy vibe that render it an engrossing, quirky masterpiece. "A Life Preserved" is late-'80s/early-'90s alt-pop at its finest. "Standing in Line" sounds like a long-lost (and very impressive) artifact from the '80s new wave movement. And "Rubberneck" features the kind of rapid-fire vocal delivery and infectiously terse rhythms that any punk revivalist band worth their salt would do well to study in depth.

Taylor's lyric writing skills have always been one of his strongest suits, and the intervening years between Squint and Goliath have done little to dim his proficiency in that department. "Only a Ride" ("Are we not on a holiday?/Aren't we entitled to thrills?/Didn't we pay to be entertained?/I signed a waiver that kills") cleverly challenges the widely-held notion of all entertainment being harmless fun. "Rubberneck" ("You've got a right to know/ Every ugly detail/ Get it retail/ Ready tell") lays out an equally barbed treatise on society's captivation with the sensational. And, lest he be thought of as merely a bitter older songwriter with a chip on his shoulder, Taylor shows that he is more than willing to turn the microscope upon himself, as the beautiful, gut-level honesty of the re-recorded cut that debuted on the Blue Like Jazz soundtrack, "A Life Preserved" ("Gratitude's too cheap a word for all you've reassembled/ A spirit broken and unnerved/ A life preserved"), so convincingly proves.

For all of its musical energy and lyrical insight, the strongest selling point of the record is arguably the manner in which Taylor is able to evoke memories of so many disparate styles of music while still sounding so thoroughly unique and contemporary at the same time. Likewise, any stones that would-be critics might tend to lob in the general direction of the new record - Furler's overly soft drum sound, tracks like "Goliath" and "Moonshot" paling next to their harder-rocking cohorts, the fact that Taylor's voice still remains an acquired taste - arguably speak more to listener preference than they do to any actual intrinsic deficit in the latest album. Indeed, once these trifling arguments are laid to rest, what listeners are left with is quite simply a riveting, superbly-crafted work that, when it's all said and done, might just be Taylor's finest effort to date.

20 years is a long time to wait for anything, but with it being a full two decades since Steve Taylor released a full-length project of any kind (he had a live album in 1994), the anticipation for something great is indeed high, with the pressure undoubtedly felt by Taylor (hence the year-long process to actually make and release the record). The end result, however, has been worth the wait. Taylor's raw rock sensibilities created by a sort of classic all-star CCM group doesn't really fit in with the majority of today's over-processed, fast-food-style CCM pop, but that's also what makes this an absolute delight. It's fun, it's thought-provoking, it's catchy -- it's everything we've come to expect from Steve Taylor, whether he's writing, performing, or directing.

Don't expect to unpack all of Goliath's gems in one listen either. The must-read-along nature of the clever "Comedian" ("Man makes plans, God laughs," as well as each pun, especially stand out) adds to the fun of it, while "Happy Go Lazy" just demands the listener to start moving. The highlights are in abundance, with "Double Negative," "Only A Ride," "Rubberneck," certainly among them. The only possible negative to the album (besides it being slightly brief at just under 40 minutes), are perhaps Taylor's squawking screams on the otherwise funky "Moonshot" and the strained yells on "Goliath," but really, these are just nitpicks on what is easily, without a doubt, one of the diamonds in the rough to be released this year. Taylor's back, and thanks to The Perfect Foil, so is rock n' roll. - Review date: 11/19/14, John DiBiase

I grew up in a time after Steve Taylor had long-ended his solo music career, but became acquainted with the name in connection writing for the Newsboys. With delight, I can say that Goliath not only invokes the catchiness and wit that I loved in the Newsboys during that time of my life, but that it even surpasses such Taylor-penned albums as Go, Thrive, or (dare I say it?) Take Me To Your Leader. "Only a Ride" begins the album with an unbelievably catchy bang, and takes the listener on a perfect roller coaster of a ride, not only sonically with songs like the beautifully alternative "Double Negative," beat-driven "Moonshot," or new-age "Standing in Line," but lyrically with the biting sarcasm of songs like "Goliath," "Rubberneck," "The Sympathy Vote, " or "Happy Go Lazy." And finally, the pun-and-metaphor driven "Comedian" finishes off this brief album in epic fashion. Once getting over the disappointment of Goliath's brevity, it is hard to deny the mastery Taylor (and friends) have over music. - 11/22/14, Mark Rice of Jesusfreakhideout.com

The ever satiric, sarcastic, and sardonic (that's a lot of fancy "s" words) Steve Taylor has returned with his very long-awaited follow-up to Squint. His newest effort, Goliath, picks up at the most logical place following Chagall Guevara's self-titled (1991) and his final solo effort, Squint (1993). A new wave influence mixed with some 80's and 90's pop and alternative dominates the sound musically. Some may dismiss Taylor's most recent album as "dated," but that's hardly fair. I'm pretty sure Tom Petty's newest release isn't getting that same treatment. Speaking of Petty Taylor's voice actually reminds me of a strange mix of Tom Petty and Pete Furler ("Double Negative" even brings to mind Petty's "Runnin' Down a Dream"). To skip this album because Steve Taylor is doing what Steve Taylor does would be ill-advised. Solid music and on-point lyrics make Goliath a more-than-worthwhile investment of your time and money. Whether it be a rocker like "Only a Ride" or "Rubberneck," or the more new wave influenced, like "Standing in Line," Goliath is a win. The album favorite for me is the multi-faceted "Happy Go Lazy." The infectious groove, ridiculously catchy whistles, excellently placed sax, and the amusing background vocals make it a highly entertaining listen. Steve Taylor has been absent (at least from releasing his own music) for 21 long years; don't miss his stellar return. - 11/17/14, Michael Weaver of Jesusfreakhideout.com

Aptly named, Goliath marches onto the scene carrying a full load of industry giants. The debut album from Steve Taylor & The Perfect Foil sees several musical masterminds restored to their former glory, bringing anew the originality which (once upon a time) set them apart from the flock. The self-confident album holds nothing back, delivering a poignant, witty, and intensely provocative message. Steve Taylor's signature writing style once again returns listeners to the days when vegetarians barbequed hamsters and where laundry met its eternal destiny. Goliath finds itself as a solid offering, relaying an awkward reverence to God, mocking the devil, and poking some (mostly) good-natured humor towards the church. This must-buy album refreshes the tired genre with an old vibe, bringing a new generation of listeners a higher standard of art than has been seen in recent years. My top starter picks are "Comedian," "Goliath," and "In Layers." - 11/17/14, David Craft of Jesusfreakhideout.com

Am I dreaming? Are my ears hearing sounds that are not real? Is there really a new Steve Taylor album that sounds like he picked up where the masterful Squint left off twenty years ago? Am I really hearing sacred cows and societal trends being skewered, like they need to be, in songs like "Rubberneck" (a needed pasting of internet gawker culture) and the title track which takes on Christian (and other kinds of) celebrity culture, and sounds timely in light of recent scandals in mega church circles? Was Taylor cryogenically frozen and brought back just this year and given a stack of newspapers? Is that really Peter Furler on drums? Is this really one of the best, most rocking and thought provoking albums of the year? Yes, yes it is. - 11/16/14, Alex Caldwell of Jesusfreakhideout.com