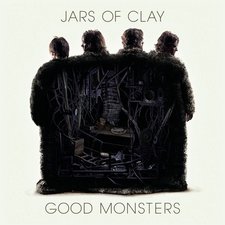 Thirteen years into their impressive career, Jars Of Clay is still challenging themselves as artists to create relevant music with a message worth hearing. After resurrecting classic hymns last year to give them a modern revisit, the alt rock quartet is returning to what they know best.

Jars Of Clay has never been a band known for riding a trend or sticking to a set formula. Even after they've found a sound and process that seems to work for them, the guys push themselves a step further, despite the risks this may entail. Good Monsters, the band's boldly titled new record, explores unchartered territory for this once-folk-pop act while combining elements from what we've come to love and expect from Jars Of Clay. When the opening electric guitar riff of "Work" tears into the album, many will find a brand new side of this seasoned band revealed. What unfolds is an edgy, emotional anti-anthem for isolation that boasts a deliciously painfully honest chorus, "Do you know what I mean when I say, 'I don't want to be alone?'" It's this kind of risky sheer honesty that permeates Good Monsters, threading its separate parts into a whole.

"Dead Man (Carry Me)" is a fantastic edgy 80's throwback that features vocalist Dan Haseltine pushing himself in new ways. The album does a sharp turn back to the kind of rootsy southern rock established on Redemption Songs for a delightful cover of Julie Miller's modern hymn-like original, "All My Tears." It's after this particular cut that the album begins to feel stylistically schizophrenic while remaining thematically harmonious. "Even Angels Cry" is a delicate ballad that abruptly ends the string of rock openers, which is followed-up by the distinctly folk-country sounds of "There Is A River." The title track shifts gears once again to incorporate a more unashamedly upbeat and catchy guise to drive home the idea established by Edmund Burke's famous quote, "The only necessary thing for evil to succeed is for good men to do nothing." The song is quirky and fun, which is offset by yet another abrupt shift with the soul-bearing lament, "Oh My God." This soft ballad examines the human need to cry out for a Savior from all walks of life, ending with Haseltine's own personal stream of reasons why he calls on God. It's this kind of openness that makes such material on Good Monsters all the more impactful.

"Surprise" is another highlight, a moody look into selfishness, which is followed by the album's last upbeat rock track, the especially memorable "Take Me Higher." "Mirrors & Smoke" is truly the ugly duckling of Good Monsters, an oddly placed but smartly executed nod to Johnny and June's "Jackson" that features Leigh Nash singing opposite Haseltine. Things return to a more serious note with "Light Gives Heat," a song that features the African Children's Choir and examines our approach to the crisis in Africa, admitting we're just as much part of the problem as we are trying to be the solution. Good Monsters then ends nicely on a tender, hopeful outlook on committment in relationships with "Water Under The Bridge."

Good Monsters is a daring new direction for one of Christian music's most important and relevant artists. While the record may seem to lose a little steam after such a strong opening, the as a whole, it offers a collection of songs that blend the diversity of If I Left The Zoo with the class and artistic integrity of Who We Are Instead to create a truly unique and original project. Good Monsters is a stroke of greatness.

- Review date: 8/31/06, written by John DiBiase class="coversize" align=right>
Thirteen years into their impressive career, Jars Of Clay is still challenging themselves as artists to create relevant music with a message worth hearing. Good Monsters, the boldly titled follow-up to last year's hymns effort Redemption Songs, explores new territory for the alt rock quartet while combining elements from what we've come to love and expect from the band. From the edgy opener "Work," to the Johnny & June inspired "Mirrors & Smoke" with Leigh Nash, to the soft lament of "Oh My God," Good Monsters looks to offer the diversity of If I Left The Zoo with the class and artistic integrity of Who We Are Instead...