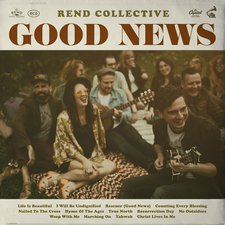 
Joy is an elusive thing. Happiness comes and goes like the ocean tide, but true joy--the deep-down, foundational kind--is a quality to be celebrated and cultivated. And no band does ‘joy’ like the Irish quintet, Rend Collective. And their new album, Good News, is a masterful and rowdy celebration of what brings true joy to a soul, the Gospel message.

Gospel is an old English world for “good news” (‘good’ plus “spell“, which was a phrase for news before it came to mean something magical, as in the old-timey phrase “sit a spell“.) Similar to the phrase “Godspeed” (both words have little to do with the Lord, the “god” in both cases was a shortening of ‘good”), Gospel has come to mean a host of different things in the modern day, like the genre of music or a kind of church denomination. But the core idea has remained. Followers of Christ have responded to the best kind of news, that through Christ and his death and resurrection, we can be restored to fellowship with the divine.

But too often, that good news can get lost or swamped by the paranoia of times. After a rough 2016 and ‘17 (particularly here in the U.S.), Rend Collective has decided to unabashedly shine a light, and not just curse at the darkness. And the great thing about Good News is that they have widened their musical palette while still cranking up the energy and rowdiness of their past albums.

Lead single “Rescuer” takes a page out of the Lumineers “Ho Hey” playbook, and bobs around rhythmically, with a shouted, anthemic chorus that shows their Irish roots in full bloom. “Rescuer” is a fantastic pub song for the redeemed, drinking from the well of life.

The rowdy, manic tunes are still present, however, they’re just done a bit more acoustically than the loud surf punk of the last few albums. “I Will Be Undignified”, a terrific, dancing worship song moves at a lightening pace, with an inspiring fiddle and foot-stomping intensity. “Counting Every Blessing” is likewise energetic and moving, with a great delivery by front man Chris Llewellyn.

But it’s the more nuanced numbers that show that Good News is the band’s most mature work to date. “Weep With Me” is an elegant, acoustic lament that shows the other side of celebration. The Biblical books of Psalms, Job and Lamentations are full of sorrowful expressions of doubt and struggle, and too few artists of faith (particularly those who operate in the praise and worship genre) sing about anything remotely approaching these subjects. “Part the seas / Lord make a way for me / Here in the midst of my lament / I have faith, yes I still believe / That You love me / Your plans are to prosper me / You're working / everything for good / Even when I can't see. / You know I believe / Help my unbelief/ Yet I will praise You / Yet I will sing of Your name / Here in the shadows / I'll lift up an offering of praise / Lord I believe that you weep with me.”

The reprise of “Weep With Me” wonderfully quotes and paraphrases Jesus’ beatitudes against a mournful string section, reminding the listener that “what’s true in the light is still true in the dark.”

“Nailed To The Cross”, “No Outsiders” and “Hymn Of The Ages” also take slightly different tacks than your average, mass-churned-out worship tune, with interesting song structures that aid in the flow of the album. “No Outsiders” is a particularly timely song in terms of the issues of prejudice, xenophobia and racism that still plague the U.S. (and, to be fair, the rest of the world too).

The album’s only true misstep is the slightly hokey, electronic hoedown with Hillsong Young & Free (a band name that just has to go), “Marching On.” Coming on the heels of the profound “Weep With Me”, this song is a jarring, tonally out of place number that traffics in “victory’ cliché’s, even if those cliché’s are well meaning. The dancey, electronic keyboard line and beats could have been done with acoustic instruments and the song would have fit the overall album much better. The lyrics about ‘marching on‘, by themselves might have been okay, if the odd beats and vocal effects had been scrubbed. It’s the album's one true misfire. The fact it’s also followed up by the beautiful and pensive “Yahweh”, which rounds out the album, makes the song stick out even more.

But Rend Collective’s Good News more than lives up to its Gospel-inspired title. It’s the band’s most inspired and nuanced album, with creativity, energy and heart to spare. This spunky Irish group has created a folk-rock worship album opus that is a welcome bit of sunshine in the cold of winter, and one of the best things you’ll in all four seasons this year.

Rend Collective is an anomaly in the Contemporary Christian Music industry. As a genre that is comprised of many subgenres, CCM interestingly does not often contain direct influences from a specific country's style of music outside of the US, so when Rend Collective burst on the scene with their brand of Irish folk rock, few could have predicted they'd become a Christian music household name. Not known to wait long between releases, this is the most amount of time they've gone without releasing a new studio album, and the result is fantastic. With 15 tracks and a runtime just shy of one hour, it's an ambitious project, and fortunately they have quality to match the quantity. In fact, Good News highlights all the best characteristics of the band: undeniably catchy choruses, infectious organic energy, and a tangible sense of a burning passion for Jesus. From the lively opening track, "Life Is Beautiful," to the electronic-infused "Marching On," to the stripped-down track "Weep With Me," this album finds the band really owning their sound and showing a great deal of maturity. They even incorporate some of their signature campfire vibe on the cello-led "Yahweh" and the outro of "Counting Every Blessing." Most tracks could be considered potential radio hits, yet each track is unmistakably a Rend Collective song. The only criticisms are the unnecessary ukulele version of "Counting Every Blessing" (which is a totally fine song in and of itself) and the album's occasional use of common worship lyrics. Granted, they've always done well keeping their lyrics simple and slightly familiar, so it's hard to fault them on their songwriting. Overall, this is a big step up from As Family We Go and the strongest record in their discography. Good News is poised to be the band's most successful album, both commercially and critically, so you will not want to miss this early highlight of 2018. - 1/12/18, Christopher Smith of Jesusfreakhideout.com