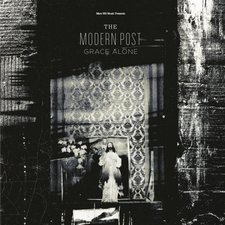 The modern church is filled with contemporary Christian music: positive songs that are safe for the whole family and, at their core, desire to bring glory to God. The traditional church is filled with hymns: songs that are filled with doctrinal richness and, at times, point out humanity's depravity - which does not always achieve a joyous and copacetic reception. Both of these styles are good and glorify Jesus, but rarely does someone achieve blending the two so well. However, in the case of The Modern Post, on their debut EP, Grace Alone, the band doesn't just mesh the two styles together - they've brought them to a collision and the explosion is breathtaking.

The album begins with the gritty interpretation of the hymn "Just As I Am." With a funky bass line, industrial low keys, and the voice of Dustin Kensrue (front man of the band Thrice), you would never have known this was being sung in pews in the mid-1800's. Title track "Grace Alone" follows and it continues the grittiness but with a lighter tone. Lyrically, it is doctrinally solid as it embraces the undeserved grace and atoning work of Christ, as Kensrue sings, "I worked my fingers down to the bone; but nothing I did could ever atone, but Jesus, you paid me debt." The music is creative, the melody is catchy, and the words are convicting.

"Before the Throne" is interpreted with a near Killers-like synth sound, but with more musical depth. This interpretation holds the melody with an open hand and lets the music be the major change, thus keeping the integrity of the song perfectly intact. "Amazing Grace (God of Grace)" does a very similar thing, while Kensrue also adds in his own chorus as he sings, "O God of grace, who cleanses me of sin. Your strong embrace will keep me till the end." The classic hymn is by no means lessened in quality by the addition, and it really will give worship teams a refreshed version of the Christian music staple.

Bringing the album to a close is a cover of Jon Foreman's "White As Snow." To be honest, I was a little nervous about this one, but it is a standout track on the album. With the same approach being to not change the melody of the song, it is interpreted to fit The Modern Post's context. While, lyrically, it is unmistakably Foreman, it is musically a completely different song - which should please listeners.

There are many people who have recently undertaken the task of reintroducing hymns to the ears of the modern Christian. The Modern Post's home church, Mars Hill Church, based in Seattle, Washington, has become one of the major catalysts for that. It can't be said in good conscience that everyone will be successful at it, but if more high-quality interpretations such as this one released by The Modern Post come to light, I think the church of today might be returning back to hymnals.