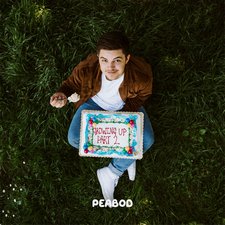 
It's hard to believe it's already pushing two years since Centricity Music's resident happy rapper, PEABOD, released his stellar EP, Growing Up, Part 1. The collection of songs was literally born out of growing pains and (big) feelings of having to learn the hard way about life and his music career, but there was always a hopefulness in them. It was truly a light in the darkness that had eclipsed all of 2020, and it became my personal top pick of releases that year.

Fast forward to July 2022 and Isaac Peabody is releasing the long awaited second piece of the proverbial puzzle, Growing Up, Part 2. Part 1 had a completeness to its sound and presentation, flowing naturally from the start with "Wonderful and Scary," and even reprising a portion of it in the EP's closer, Prodigal. And herein lies the problem inherent with EP's that were meant to collectively be a full album: disjointed cohesion. "My Favorite Part" is a standout track in Part 2, but its heavy trap influence contrasts the big poppy anthems that PEABOD excels at, and it makes for an unnatural album opener. In a way, this EP already feels like a "Side B" to the first half of an album -- as if we flipped over the cassette tape or vinyl record -- but with Part 1 beginning and ending so beautifully, these songs feel like they were plucked from the center of what would have been the 10-track album. (Incidentally, the label has said the EP's will be joined together for a CD release, but it's unknown whether it's just a stacking of the two EPs, or a thoughtful reordering of the tracks.)

The irresistibly fun "MAD!" follows, offering an earworm of a chorus that is liable to get stuck on repeat in your brain. It's an unusual song about knowing that getting angry about something might be wrong, but sometimes it just feels good to get steamed about it. There's definitely some truth here, and the song definitely makes light of it, but with its running time not even clearing 3 minutes, the song feels like it's missing PEABOD's usual positive turnaround message. Still, given its context among other very hopeful songs, it feels more tongue-in-cheek than the notion that Peabody is literally encouraging everyone to revel in getting mad. "Spring Theory" is a fun little pre-summer anthem that feels like it would have been right at home on his debut, Healthy Snacks, and the album closes with two really positive and spiritually encouraging anthems - "Good News" and "Alive" - that, while good, pale a bit in comparison to the tracks that preceded them. In the end, "Alive" is a fitting closer, but for Growing Up as a 10-track album, "Prodigal" can't be beat. It also feels a little strange that 4 out of the 5 songs on the first EP featured guest artists - like Tedashii, Aklesso, Cochren & Co, and his wife, Belle - and this EP doesn't feature a single one (not that the absence of guest spots is a bad thing in any way; it's not). This just further gives this EP the feeling that it was meant to be integrated into a more complete record.

Call me old school, but I was weaned on full-length albums as a music fan. Full-length albums were the norm, while EP's were bonus projects released between albums. For today's ever-changing, ever-transitioning music industry, EP's are becoming more the norm with full albums becoming more infrequent. EP's allow artists to release music more often, and allow smaller bites of music to be digested by our Tik-Tok, YouTube-driven culture. But seeing these two EP's released separately and viewed as two parts of one whole, I think separating them does a disservice to what could have been a really great 10-track project with an overarching theme. In a way, it also does a disservice to the EP's themselves as well. The songs on Part 2 are good, but they probably would have been great if originally heard intermingled with the songs of Part 1.

As I dismount my soapbox, I must say none of my gripes are meant to discount the content of Growing Up, Part 2 - EP, but I can't help but listen to it and see the missed opportunity. Every time I hear it open with "My Favorite Part," I feel like I'm starting to listen to the second half of an album. Part 2 is a solid batch of songs from one of Christian music's best kept secrets, even if it doesn't quite match the chef's kiss that was Growing Up, Part 1. Still, if you like your hip hop with a hearty dose of pop flavorings and joy, you can never go wrong tuning into the music of PEABOD.