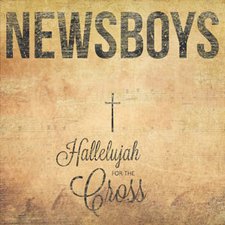 Newsboys
Hallelujah For The Cross

Newsboys 3.0 (you remember original lead singer John James don't you?) is humming right along. If the newest, Michael Tait-fronted version of this venerable band were courting the Christian music market, they have certainly hit all the marks strongly, and in a short period of time too. An album of new material with the new lead singer? Check. Worship album? Check. Live album featuring most of that worship album? Check. Christmas album or EP? Check. Second album and tour? Check. Hymns project?

Wait. Hymns project? That's not on the road map. What is this curio being offered up by the Newsboys one year after releasing their successful Restart album? Whose idea was this? Could it be a love letter to the songs Michael Tait grew up singing in his church? Would the Newsboys' bouncy sound translate to the great hymns of the faith and their relatively classical musical structure?

The answer is a surprising (but not resounding) yes. Most arrangements and marriages of modern sounds to classic melodies here slide together nicely, with a few notable exceptions.

St. Francis' beloved hymn to the creator God, "All Creatures Of Our God And King" kicks off the album, and it's immediately clear that the 'boys' found the right mix of reverence and creativity. The ending of the song is tagged with a nice bit of new chorus that adds to the overall effect of the message, yet treads lightly enough with the hymn's 500+ years of history.

Depending how you feel about classic Newsboys, song number two could either be an incidental update or a grave robbery. "Where You Belong / Turn Your Eyes" was a track on the early 90's album Not Ashamed (some might remember the video with the band walking along the beach and Jesus' name being written in the sand), and its update here is a bit faster and livelier than the older one, but the melodies and use of the old hymn "Turn Your Eyes Upon Jesus" remain solid and preserved.

"His Eye Is On The Sparrow" rocks a bit harder than the traditionally slower and sleepy hymn, but the words and melody are still impactful. The album's title track (and first single) is a new song written in the hymn tradition, but it's one of the best things here, swinging on a rich melody that captures the ears nicely and feels "older" than it is. The remaining lineup of hymns ("It Is Well," "Jesus Paid It All," "I Surrender All," "Holy, Holy, Holy" and "What A Friend We Have In Jesus") are each capably rendered and transformed. It's only "All Hail The Power Of Jesus Name" that is the odd man out here, with a snappy a cappella version that is spiffy, but dreadfully out of place.

Hymns are about as beloved a thing (and sacred cow) as exists in Christendom. Artists risk angering and alienating a portion of their audience with albums like this, but on Hallelujah For The Cross, it seems clear that Michael Tait and the other "boys" are singing and playing songs that they have loved for a long time, and the Newsboys capably and reverently update these classic songs and words for a new generation of worshipers.