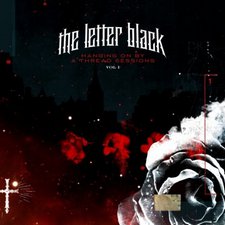 The Letter Black
Hanging on by a Thread Sessions, Volume 1 EP

The Letter Black infiltrated the Christian rock scene in 2009 with their national debut EP, Breaking the Silence, named for the band's original name. While their arrival brought mixed reviews, they quickly began to make a name for themselves with their hit song "Hanging On By A Thread," as well as national tours with Christian rock powerhouse Skillet. The Letter Black's sound has always seemed compatible with Skillet, and so the two were a natural pair. The band released their first national full-length album last April, Hanging On By A Thread, and now they've followed that up with what appears to be the first of three EP's, titled Hanging on by a Thread Sessions Volume 1.

The EP opens with the same lead-off track as their full-length album, the current hit single, "Fire with Fire." The song is an enjoyable enough fast-paced rocker. However, the fact that it's easily obtainable on their debut makes its inclusion here seem less exciting. Following next is a remix of the aforementioned track. The track sounds like a relatively typical remix. It's well done but it's still just a remix.

The major selling point of this EP is the following two previously unreleased cuts. The first song is "Useless Alibis," a track that the band had performed live before and which was said to be on their debut release in some early track listings. Alas, it was cut for some reason, which is actually quite a shame. The song is quite an enjoyable rocker and would've fit well on the album, perhaps over the recycled "Moving On." It may sound similar to their other rock songs, but it's still got enough punch to it to merit its own existence. It's good to finally get the song released here, as many of these types of b-side songs never see the light of day.

Next up is the powerful ballad "While You're Away." The song is about missing a loved one who is away and praying for God to keep them safe. I've heard that the song was written while lead singer Sarah Anthony's father was serving overseas. The melody is captivating and Sarah's vocals have never sounded better. In terms of lyrics, it's breathtaking and the instrumental bridge really takes the song to new heights.

The EP closes with another recycled track, this time in enjoyable rocker "Collapse" from their Breaking the Silence EP. While the song's good in its own right, its inclusion here feels a bit unnecessary. Although having read that their last EP is discontinued, I guess it's not totally unthinkable. The EP also contains the energetic music video of "Fire with Fire," which is a nice bonus.

Ultimately, this EP is an enjoyable treat for fans, although I doubt it will convert anybody who didn't like their previous releases. The album covers of the three EP's are said to connect to form the complete artwork, but those will only be available at the band's live shows and through the Tooth and Nail online store. If you're looking for just digital copies, it's tough to justify downloading the entire album if you have the previously released songs. However, all TLB fans should definitely at least grab the two new songs from iTunes or Amazon. They make nice additions to the band's debut album. Either way, this EP is a well-done release from start to finish, and it makes me excited to hear what the next two will have to offer.

The Letter Black threw themselves at us a couple years ago, and have managed to gain a lot of fans, but not to make any interesting music. Talented musicians make up the band, but there's a great lack of creativity or anything to separate them from every other band that plays The Letter Black's brand of generic rock music (other than the female vocals, but even that doesn't quite do the job). The first volume of their Hanging On By A Thread Sessions EP further cements their overall mediocrity. Sarah Anthony has a decent singing voice, but her vocals usually sound somewhat forced. She also sounds VERY breathy in "Collapse," which is only obnoxious, and nothing else. The unreleased tracks aren't anything special, so there isn't a lot here to entice a purchase. Methinks the next two volumes may be a little unnecessary. - 4/10/11, Scott Fryberger of Jesusfreakhideout.com