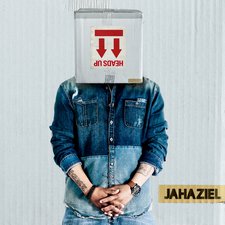 With the recent upswing of a new brand of relevant Christian rap, it is easy to lose track of the seemingly endless parade of new emcees entering the scene in the past few years. Artists like Lecrae, Tedashii, Flame, Shonlock, and Andy Mineo have been rewriting the book on gospel rap, and it turns out that British rapper Jahaziel wanted to get in on the action. Jahaziel released his debut from across the pond in 2007 to a relatively underground reception. 2013 marks his sophomore album, Heads Up, and if there's anything this effort should convince listeners, it's that Jahaziel just might be that underground artist the industry is looking for.

Right from the beginning, there is a sense that the somewhat less sophisticated sound of Jahaziel's debut has been tuned up and remixed. "I Said Yeah" is the first of a handful of reggae-influenced songs. The song features some soulful organ and a laidback style that really draws the listener into a comfortable setting. While the tracks are far from perfect, there is something to like in each. This album may take a minute to really get under your skin because of somewhat repetitive songs like "Amen." Then again, when you really hone in on the lyrics of songs like "Famous," there are some really thought-provoking concepts present. "Famous" speaks to the misconceptions most people get about fame and what it truly means to serve what he refers to as "the Famous."

The hard-hitting style really steps it up a notch with the next fews songs, starting with "Go Get 'Em," which is an honest look at evangelism and the difficulties of street ministry. This song also features an excellent guest spot by J.R. that blends flawlessly into the gospel-influenced chorus. "V.O.H." (Vessel of Honor) is another fervent worship offering. This also has two excellent guest appearances by Sean Simmonds and Guvna that fit well with Jahaziel's delivery. The background elements are a bit like his debut and seem somewhat outdated, but the song seriously kicks it up a notch and is really rolling by the end. The next song, "They Don't Care," is a fantastic street anthem that pulls no punches. These lyrics really bring out Jahaziel's roots in the slums and gang culture of London. The raw emotion of this song is quite beautiful.

"Hold On" is another reggae offering that is funky and provides a breath of fresh air after the sincere but somewhat oppressive themes of the past couple songs. The next song, "My Angel," is an honest love song in which Jahaziel explores the difficult road we follow in love. Though some of the lyrics are a bit chintzy, the honest approach is a valuable element. He certainly makes a case for a pure kind of love that needs to be promoted in the music industry. "Round and Round" is a lyrical highlight of the album in which Jahaziel takes a bleak look at judging people. In the first verses, he describes an encounter with a homeless man that upends his views when he realizes how similar the man is to himself. The rest of the song follows the same theme of human empathy. The second verse is a heartbreaking look at a history of domestic abuse that has scarred his family life. ("It's not fair to say 'I suffered, so you suffer too.'/Cuz hurt people hurt people/It's nothing new.") The sense of gravity in this song is strong enough to make you really think, which is a characteristic of great music.

In "Falling Stars," Jahaziel raps about the glamorous culture of celebrity worship, taking a look at the people behind the personalities. The song is based around Psalm 121, with each vignette ending with the hope that the character will "Lift up [their] eyes to the hills." The chorus is beautiful and this is another incredibly truthful song. "Better" changes to a more upbeat pace than the past few songs that is funky again. It's not a bad song, but the message gets a bit lost in past themes. "Numbers Game," however, has a very clear message about the ups and downs of gospel rap. Elegantly crafted with gorgeous piano, liquid bass lines, and a strong chorus, this song will get your head bobbing. It is a real highlight of the album. It's incredible to hear something so humble and authentic from an artist. The album wraps up with the ballad "Forevermore," which is about being weary of the world and ready to move on. It's soulful and has some interesting stylings, but ultimately is a bit drawn out and overdone. "Numbers Game" probably would have been a better closer in this case.

Jahaziel, similar to philosophical emcees like Lecrae or Propaganda, really commands the attention of listeners with his straightforward lyrical style that makes listeners think about real issues. The fact is, Jahaziel isn't a household name and may never be, but Heads Up is a solid offering. Listeners who are fans of the movement to breathe new life into the gospel rap scene should check this out. Jahaziel seems to really be on board with a more modern sound that has an incredible flow at times. Overall, this is far from perfect, but Jahaziel has succeeded at releasing a solid second album. Give it a listen if you're looking for something a little different.