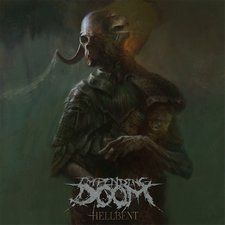 
California-based Christian deathcore legends Impending Doom built quite a discography of "gorship" music in their early days, a style named by the band as a combination of their gore-influenced death sound and their worship-focused lyrics. From their Facedown Records debut in 2007 to 2013, the band released five full-length albums, the last four of which charted on the Billboard 200. Since 2013's Death Will Reign though, this exceptionally loud band has stayed fairly quiet, playing Facedown Fest occasionally but staying out of significant touring and releasing only one album, 2018's excellent The Sin and Doom Vol. II. Having now allowed a new generation of heavy bands to stake their claim to prominence in the Christian extreme metal scene, Impending Doom returns with punishing new EP, Hellbent, released on MNRK Heavy (in a surprise, three months prior to the previously announced January 2022 date via eOne), to remind everyone that the brutal veterans can still hang with the new kids.

Leadoff track and first single "Satanic Panic" dispenses with the foreboding, slow-build intros that are frequent in this genre, and instead jumps right into the fray with unrestrained aggression. The fury of the music is matched by the lyrics: "Satanic panic / Every day gets a little closer / You will feel the wrath of God when we watch the noose drop / Vengeance is His name!" Relentless with its menacing anger, it's one of the best songs in Impending Doom's extensive catalog. The rest of the EP is a lyrical mix of similar full-throated war music ("Fearless in the face of death.and we're ready for war" from "New World Horror") and some less interesting self-loathing in the later tracks ("Every time I open my heart / I feel the whole thing ripping apart / You can't put me in my grave if I'm already there" from "I Must End"). Musically though, the album doesn't ever quite reach the heights of the opener, with the middle songs sometimes feeling cut-and-paste in their deeply de-tuned riffs and palm-muted breakdowns, though every song does have at least a section of destructive energy that cuts through and shows the band at its potential best, and "I Must End" is a great closer with the most varied and interesting drumwork of the EP.

Veteran metal producer Will Putney, with over 50 metal albums to his credit, including For Today, Fit For a King, and Norma Jean's All Hail, is credited with the mix and his work does justice to the brutality of the music, keeping the guitars crisp and distinct (no small feat when everything is tuned so low) and elevating the vocals of Brook Reeves, which sound better than ever. With Reeves less focused on gore-style growling and more on hardcore scream-shouting and the vocals mixed so well, it's actually possible to understand what's being said, which feels like a bonus sometimes in this style of metal.

Deathcore is often exactly what it is as a genre and Impending Doom is no exception; it can be repetitive at times, with almost non-existent lead guitar and often mired in what feels like endless sludgy breakdowns in the midst of a promisingly aggressive song. It's not a genre that will ever be particularly progressive musically, and as such, it's a wise decision by Impending Doom to shift their focus from full-length to a five-song EP, because the 20-minute playtime of Hellbent feels like the perfect amount of time to consume this music before it might start to wear its welcome out. Though it does not exactly chart a new path for Christian heavy music, with Brook Reeves sounding as good as ever and Putney lending his expert touch to the outstanding mix, Hellbent is certainly a worthwhile listen for fans of the most aggressive spectrum of heavy music. There are plenty of great new metal bands in 2021, but this veteran band sounds as uncompromisingly heavy as ever, and in a year of consistently strong metal EPs, Hellbent is another that is worth checking out.