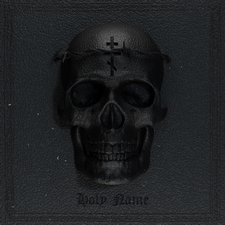 
Tommy Green is certainly a familiar name to fans of Christian heavy music; his origin with Facedown Records metal band xDEATHSTARx now dates back more than two decades. Still, he's likely better known for Sleeping Giant, the hardcore band that he led through five studio albums, including their blistering Facedown-released 2018 swan song, I Am, one of this writer's favorite releases on that label. Green is finally back with a new Facedown project called HolyName, a duo with guitarist Joe Holt. And to be honest, it feels a little odd to be writing this review in January of 2023, because HolyName has been on many heavy playlists for a long time -- the first two singles from this project date all the way back to April 2021, and two-thirds of the album's nine core songs (an additional three interludes complete the 12 tracks) have already been released individually.

For those who haven't been paying attention to the trickle of song releases and are a fan of Green's previous work, you're in for quite a surprise with HolyName. If you're expecting the quick slap of modern metalcore or even the aggressive fist-pump of hardcore that Sleeping Giant excelled at, you'll be caught off guard immediately by the mid-tempo drone of power chords (not a word I came up with myself; in fact, the phrase "holy drone violent worship" has been used in the band's promotional material) and the major-key structure. And if you're expecting a front-row seat to hyper-loud screams, you'll certainly be caught off guard when Green's voice enters like a subdued church choir, deliberately mixed with less prominence and a sanctuary full of reverb, almost to the effect of the Gregorian Chant albums that were so popular in the 1990s. The music style during the "heavy parts" is a hardcore-, occasionally deathcore-leaning style of brutal detuned drone with stacks of breakdowns, occasional blast beats, and nothing in the way of leads. The fascinating part is when songs like "My Way" and "Creed" effortlessly transition from their death sound to a progression built on major key roots. Though the sound of the guitars remains loud and punishing, you can find yourself singing along and realize that this could easily be sung by a group of worshipers around a campfire with a quiet acoustic guitar.

Similar to Sleeping Giant's powerful finale, this album is loaded with effective guest appearances, and Tommy Green lets them handle all of the unclean vocals while he focuses on the clean singing, with his vocals self-harmonized and covered in reverb. The effect of alternating between his lower-mixed cathedral praise and the pummeling screams of an all-star cast of modern Christian screamers -- among them Demon Hunter's Ryan Clark, Impending Doom's Brook Reeves, Convictions' Michael Felker, and Beloved's Joe Musten -- is a remarkably effective one, and it's important, because while the drone-worship sound is interesting, it does cause some songs to feel a bit redundant and lose some steam before they finish. I found myself wondering, as I have with many deathcore-leaning releases, whether this would have had more effect as two EP releases.

The depth of the album becomes much more significant as you understand what a personal project it is for Tommy Green, who describes it as a "love letter to Christ and a tribute to the history of Eastern Orthodoxy." During the post-Sleeping Giant years outside of public view, it's clear that Tommy walked through significant personal trials and could not find answers in modern charismatic Christianity: "I was losing such faith that I needed to find the eyes of Christ somewhere and I couldn't seem to get my feet under me with the answers that I had. I was really in danger of walking away from quite a lot." The liturgical practices of the historical church are a curiosity to some; for Green, they were an avenue back to embracing his faith and casting aside a sea of modern nonsense. That embrace of traditional simplicity is present in the lyrics, which are beautiful meditations of worship, as simple as "Lead me onward / I will trust in You / All good comes from His mighty hand" in "Fall on Your Knees" and occasionally more focused on topics such as the first-century martyrs in "They See": "I embrace the pain / I'll endure the dark cloud / I will see the face of God / Hide me in your heart, oh gracious Messiah."

With a deeply heavy sound that eschews the punchy riffs and snappy leads of modern metalcore, HolyName's drone worship sound is definitely something new in a musical climate that badly needs creativity injected into heavy music (and worship music, for that matter), and makes great use of its guest spots. Having lived with some of the best songs on this album for more than a year already though, it's a style that slightly wears out its welcome before the album's 50-minute length concludes, but it's still without question one of the more interesting heavy music releases in a while, and hopefully the first chapter of what should be a great 2023 for Facedown Records.