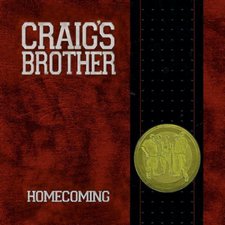 
Craig's Brother's album, Homecoming, was granted the No. 65 position on Jesus Freak Hideout's top 100 Tooth and Nail Records albums list and that ranking was certainly deserved by this album. Here is a review that digs even deeper into this album.

First, I will go over the lyrics of the album. Despite the band's intentions to distance themselves from the Christian music industry (even going so far as to have a non-Christian band member at this time), Craig's Brother still crafts some lyrical gems that range from almost blatantly Christian ("In Memory") to just a positive message possibly inspired by a Christian worldview ("Lonely Girl"). Disappointingly though, there are still some songs that are pretty obscure in their lyrical content ("Nobody", "Sorry").

Here are a few of the standout songs from this album. "Insult to Injury" is about not judging those who struggle with sin, as sinlessness is a lie (see 1 John 1:8). "Going Blind" is about struggles with lust, specifically pointing out the lack of respect toward women that comes along with this heinous sin. The lyrics are certainly relatable to men, but possibly more blunt than need be in song form. "Lonely Girl" is a song about a single mother who is struggling with a pregnancy, but the song also expresses the joy of bringing a child into the world. "Potential" closes the album by questioning those who don't take the opportunity to be greater, and the song ends by telling the listener to dive into those opportunities.

Musically, Homecoming is pure punk-lover's heaven, with high beats per minute and strong vocals. The only problem with the music is that the songs can start to sound similar to one another just a few songs in. The best, and most distinctive, song from a musical standpoint is "One," which contains fast guitar string plucking and an awesome guitar solo, neither of which are found anywhere else in the album. All around, Craig's Brother delivered an enjoyable (but certainly not flawless) punk masterpiece. If you enjoy punk rock, I would highly recommend you listen to this essential piece of Tooth and Nail Records history.