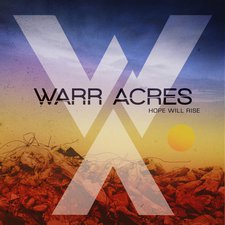 Two years ago, the worship band from Victory Church in Oklahoma City renamed themselves Warr Acres and joined forces with Dream Records to start a fresh recording career as a stand-alone group. Now the band has released a second project, entitled Hope Will Rise, mixing their worship background with more electronic influence, and the result is refreshing. In a sometimes stagnate market, Warr Acres has successfully breathed some life into worship music.

The album opens with the upbeat track "Pulse," which showcases their distinct synth-based sound well, but ultimately repeats a bit too much. The upbeat pace of the song definitely sets the tone for a lot of promise on the record. The next song, "Freedom Fall," features some more mature and thoughtful lyrics and an appearance by Dream Records artist Jonathan Thulin, who provides some stunning harmonies. The song explores dashed hopes and the need for God to complete us in our times of brokenness.

Unfortunately, the rest of the album follows a similar pattern, with every other song being a strong effort and many songs falling into dangerously cliché worship patterns. Songs like "Beautifully Complete" and "Lovesick" tread on interesting territory not usually explored by worship artists. They have a vibe to them that indicates there is some real musicianship going on with this group. There is a touch of integrity to their overall sound that makes them interesting to listen to. In addition, a theme of humanitarianism shines in the sincere and profound lyrics of the title track, "We are wholly interceding for our children lost and bleeding/We'll see slavery bow to freedom and the sick restored to healing/So we fight for those who've fallen and we'll take back what's been stolen/From our families shamed and broken/Hope will rise and hearts will open." At other times, however, the lyrics cross into tired worship clichés, and I found myself wishing for more consistency since many of the lines are quite moving. There is no question of the band's honesty and willingness to take on worship much like David did, though. Many songs speak of the incompletion and longing for healing in God.

After "Lovesick," the album falters a bit, and there is a string of songs that are less creative and sound less sincere than the others. Songs like "So Much Greater," "Come to Jesus" and "All Around" seem like padding to make the album longer. These songs suffer from recycling worship themes and sounds, in some cases using effects that would have felt right at home in the 90's CCM scene. The album really seems to lose its former rhythm here, but "Psalm 27" puts it back on track. This is another haunting track, an homage to a popular passage for worship songs. This song is passionate, back-to-basics worship that really basks in the experience for a moment. It's a nice effect and a good addition to the album. "Nobody Else" follows suit with strong vocals, by a guy this time (as opposed to the band's usual female leads), and simple but sincere lyrics. This song is a real highlight. It manages to be dark and worshipful at the same time.

Next is catchy coffee shop piano tune "Linger," which is reminiscent of something by Audrey Assad. Again, the vocals shine above some really impressive piano work. This song is infectious and really embraces the beauty of simplicity. There are none of the formerly prevalent synths or guitars, yet this song is absolutely gorgeous. Even the lyrics, which speak to lingering on the beauty of the everyday, build to an inevitable encounter with God where He poses the question, "My child did you linger?/A little while longer/Those good words and deeds are not what I need/I only want you." The song then closes with a soulful chorus of "Tis So Sweet to Trust in Jesus." It would be a powerful closing, if this were the end. For whatever reason, the group decided to tack on one more song, "Here At Your Feet." It is an unnecessary addition and really doesn't wrap up the record like it should. It's another song that delves somewhat into that old-school worship most of us wish would go away.

Despite a disappointing ending, this album makes a valiant effort to create worship music that is more thoughtful and creative than much out there. There is room for improvement, but Hope Will Rise is not at all a bad option if you're looking for worship music with a bit of a twist.