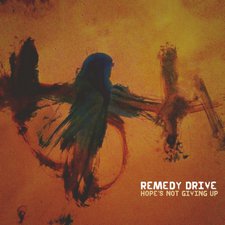 Remedy Drive
Hope's Not Giving Up


Prior to 2010, Remedy Drive was Christian music's ultimate brother band. Having played music together since 1998, the Zach brothers (David, Phillip, Paul, and Daniel) released six independent albums and one critically acclaimed label debut, plus a companion EP to the latter. Then one day in April 2010, the band announced that Phillip, Paul, and Daniel would be leaving. The resulting redesigned Remedy Drive released another critically acclaimed album in 2012 while two of the three brothers did their own musical ventures, most notably Phillip Zach's solo project Arrows & Sound, a project with an impressive electronic sound. Eventually, David and Phillip would make music again together, and Phillip served as the producer for newly-indie RD's 2014 album Commodity, an anti-sex trafficking concept album. The result, which featured an overhauled sound of heavily processed electronics reminiscent of Imagine Dragons, was a perfect storm that was (for this reviewer) one of the highlights of all of 2014.

The purpose of that brief history lesson is to set the context for Remedy Drive's newest venture, the concept-album-esque Hope's Not Giving Up (whose title does an excellent job of explaining the concept). Apparently, this project went through several stages of development and revisions, with the original idea of an acoustic album morphing into simple redesigns (a-la Jars of Clay's 20) before becoming what David called, "a renewed hope at 110 decibels." Now down to just David, bassist Corey Horn, and drummer Zach Hunter, but retaining Phillip for production, Hope features nine historic tracks from RD's repertoire plus one renamed one from their indie EP, Light Makes A Way, all bombastically done in a similar style to Commodity. And let me tell you, they hit all 110 of those decibals!

Hope is an overpowering album that will hold onto your attention like drops of water on a penny. But unfortunately that is not all good. While Phillip's production on his Arrows & Sound stuff and Commodity were enhancing to the overall project, here it gets distracting, and it wastes no time to do so. The opening track "Better Than Life" (originally from Resuscitate) features an overpowering fuzzy synth bassline that feels more like burlap than polar fleece. Repeated listens definitely allows it to soften a bit and become more enjoyable, but my first listen or two was borderline unbearable. Many other tracks suffer from similar problems as well, though none are as pronounced as "Better Than Life." And it is a pity too because most of these re-imaginations are otherwise very stellar. "Resuscitate" in particular was a standout track with a dirty, almost demo-like quality on the guitars, which meshed well with the synthesizers. Both Rip Open The Skies songs included ("Statues," and "Come Up") were fun listens as well, and appreciated since a lot of listeners may not have even heard them in their original form before (Rip Open The Skies was the band's last indie album in 2006 before signing with Word Records). I'll also highlight the album's closer, "Jack's Song" (originally released as "Follow Me" on the Light Makes A Way EP). It is a much-needed down-tempo, piano-based song (though still with an evident bassline), and works as an excellent closer.

In all honesty, I probably (now) like Hope's Not Giving Up better than a 3.5 star rating would seem to indicate, but I simply cannot underemphasize how unfortunately unpleasant the burlap-y basslines were for me upon my initial listens, no matter how much I got used to it and ultimately enjoyed the album as a whole. The song selections were excellent, not only being a great sample of the band's best work in their original form, but also in how they tied together with the theme of hope. And in spite of the production issues, the fact that they are done in a similar style to Commodity is a big draw as well, due to how much I came to admire that project. And I'm sure that an audience properly informed of what to expect will wonder what I found to complain about in the production. Perhaps, but that is all the better for the listener, who will surely find its quality to be greater than that of 3.5 stars. So fans of Remedy Drive, in particular fans of Commodity, will surely not want to pass this up.