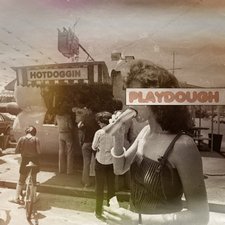 Playdough's been busy over the last five years, dropping several mixtapes and an EP and doing work with his crew, Deepspace 5. But it was in 2006 that he released his last official, full-length studio album, Don't Drink The Water. It was a fantastic album with beautiful production and tight flows. And in the past few years, through Playdough's independent releases, we've been able to see a lot of maturity in his music, which carries on into his long-awaited new studio album, Hotdoggin'. Releasing April 26, Hotdoggin' doesn't leave the listener disappointed.

Playdough has really gone all the way for Hotdoggin'. His artistry is in full force and he's even stretched his limits this time around. With Don't Drink The Water, he had a great sound and mastered it the whole time. Since then, his style has changed a lot; it's still hip hop, but he mixes a lot of different subgenres into his latest. For instance, "The Business" has a pretty thick beat, with Playdough providing a laid-back flow over subtle club rap-style music. The music changes about two-thirds of the way through, giving the song a whole new feel, while not changing it too drastically. It's excellently executed. "My Cadillac" comes off as a bit more of a gangster rap track. With production by Blaze Won and Playdough himself, "My Cadillac" feels a lot like a track you might hear from Pigeon John instead. Additionally, fellow Deepspace 5 member Freddie Bruno brings his own personal touch to a couple tracks, most noticeably to "So What," where he also provides some guest vocals. So many other styles are involved as well; "1 Day" has a rock vibe, "I Got It Like" and "Singleminded Female" are west coast rap and hip hop, respectively (the latter containing a hint of Sublime's "Summertime" from their self-titled album), while "Rhymer Reason" is a traditional style Playdough track.

One good reason why there are so many styles is that Playdough incorporated many more producers for this album than either of his two previous releases. Playdough, under the name Harry Krum, produced almost all of the tracks on both Lonely Superstar and Don't Drink The Water, with a few exceptions. For Hotdoggin', he was involved in the production of eleven of the sixteen tracks, but even five of those had co-producers. Other producers range anywhere from other hip hop artists to strictly beatmakers to mainstream artists. "No Angel," which features one of my favorite hooks of the album, got a touch from another DS5 member, Sivion, in addition to Krum. For Beats' Sake, who did all of the beats for Playdough's last mixtape, Writer Dye, also did co-production for "Say Sumn" as well as sole production of "Franks & Beans." One interesting footnote in the production credits is in "Ya Heard," which credits the production to Mr. Dibbs vs The Black Keys. A little explanation from Playdough, and we find out that Mr. Dibbs sampled The Black Keys' music to make a sort of mash-up with a beat of his own. It's a solid beat from Mr. Dibbs. I wouldn't mind checking out some more of his work in the future.

While Hotdoggin' contains many guest appearances as far as producers, there are only two guest emcees that show up. There is the aforementioned Freddie Bruno in "So What," and the only other guest verse comes from an emcee who goes by the name of The Gift of Gab from a mainstream hip hop outfit called Blackalicious (you can also hear a short cameo from Playdough's son in "My Cadillac." It's kinda cute - er, I mean tough). The majority of the time, it's Playdough doing what he does, killing each and every song with his tight flow, witty one-liners and interesting thoughts. It's hard to pick out lines to quote, because there are just so many great ones that it's almost mandatory to hear them yourself. Topics, however, range from God and His angels always being there with us ("No Angel") to possessions being truly worthless in the end ("My Cadillac") to this life not being all that there is ("1 Day," which says "'Cause when I'm gone and highly-regarded, dearly-departed, my life just started, I'm 'bout to quit my dead end job 'cause I just realized I don't need the money, I don't need the stress, don't need to be the best and I sure don't need the worry"). One thing I will say is that I feel like, when it comes to the emceeing, this is the best Playdough has been thus far. He can rap with the best of them, and better than some of those. And he actually says things of importance. He shows off his skill here and there, and throws in some punchlines (it is hip hop, after all), all while displaying his heart for God. He finds a way to get into the head and heart of anyone listening, regardless of whether or not said listener is a Christian.

A lot of samples are used throughout Hotdoggin'. Lots of random audio clips from movies, including one from the movie Office Space. I also found it interesting that Playdough used segments of "EVENING: The Sun Set: Twilight Time" by The Moody Blues (from their album Days of Future Passed) as the hook for the album's final track, "Sunset." It has a very big Middle Eastern feel, and Playdough uses it perfectly. It's an album highlight for sure. A lot of the samples get mixed into their respective songs by the DJ's that come into play, of which there are two. In "Follow It," DJ Wise takes the reigns for the cuts (if you've heard his work with RedCloud, you already know that he's a fantastic DJ). The rest of the cuts are done by Playdough's resident DJ, Sean P. All the scratches give so much of an added hip hop feel to the whole album. These guys all working together is a force to be reckoned with.

For hip hop fans, Hotdoggin' was easily one of 2011's most anticipated albums. It only takes a couple listens to realize that it meets expectations. And in some ways, such as the musical diversity, it exceeds expectations. Playdough has taken his music to the next level. The array of different producers this time around is the reason it's so diverse, but he makes it work to his advantage. Not all of the beats are really amazing, but the majority of it is - not to mention the sound is crisp, but not overly polished. This is a must for all hip hop fans, as it's definitely the number one contender for hip hop album of the year so far. It's going to take something out of this world to knock Hotdoggin' out of that spot.

Playdough is back for the third time in less than a year, but this time with an "official" solo release. Hotdoggin opens with your typical intro but quickly jumps to "Rhymer Reason," a song with smooth lyrics laid over some nice old-school beats. Those beats will be heavily noticed throughout this entire listen and they are mostly stellar. Up next are "No Angel" and "Elizabeth Shue," tracks that both showcase the great talents of the rapper also known as Doug Krum. "Say Summ" follows, focusing on having God as the center of our lives and "1 Day" brings even more positive messages. The song talks about what Playdough would do if he only had one day to live, emphasizing what really matters in life. The remainder of the album is a mix of both good stuff and mediocre rap tunes.

There is another aspect of this album that I also want to mention. Playdough has never been the strictest Christian rapper when it comes to his lyrics and song concepts, and I'm not saying that's a bad thing. Unfortunately, I think that he has crossed the line a few times in Hotdoggin. The track "Singleminded Female" talks about how every guy wants Doug's girlfriend and they can't have her because "she's already had my baby" and the lyrics "I can't take another motherloving disappointment," from "Sunset" is completely unnecessary. In summary, the beats are hot, Playdough's spitting has never been better, and there's some good food for thought. But there's about four or five mediocre tracks and some of the content is really disappointing. This album would be perfect if it was a 10 track album, but sadly, there are 16 tracks. - Kevin Hoskins, 4/18/11