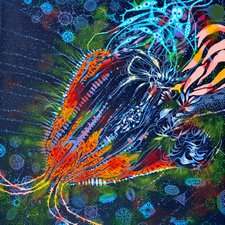 The Classic Crime
How To Be Human


Since the release of their debut album, Albatross, in 2006, The Classic Crime has found a place in the hearts of many alternative rock fans with their passionate blend of angst-soaked musicianship and heart on your sleeve lyricism. With each succeeding record, the band has managed to develop and mature their sound. After a five year wait and an excellent set of revisited material, the band is finally ready to unveil their fifth record, How To Be Human. With a successful Kickstarter behind them and a new home on Bad Christian, does How To Be Human sit among the band's best?

The album opens with a softly strummed intro before diving into the excellent rock number "Holy Water." Featuring infectious verses, an explosive chorus, and soaring production, the song is a curious look at how God sees His creation. "There is no God d**mned thing in sight, it's all deemed good in His eyes." The song does enter some shaky theological territory when it suggests that you are alone during the pre-chorus, in addition to an evolutionary view of humanity. The record itself is a concept album of sorts, displaying an overarching theme of doubt and searching that's painfully honest and transparent. Considering the questioning theme of the album tracks such as "Holy Water" can be seen as either a firm conclusion or the door to a conversation that hasn't been settled yet. Because of this open ended approach it wouldn't be too far out of line to suggest that this is some of the best lyricism we've seen from the band to date.

"Not Done With You Yet" is another strong track about evaluating one's depravity and failures. It's a flowing tune that is both beautifully composed and emotionally potent, despite the chorus being a little too repetitive. The song may also paint a clearer picture of how to see the more controversial moments on the record with the lyrics, "I created new patterns of the thought / Got a new perspective / I was just once immigrant son of a silenced preacher's wife / But black and white both died....But I'm not done with you yet." It suggests that maybe the searching isn't finished yet and there are more things to learn. The record as a whole feels quite unfinished lyrically, so it's a plausible viewpoint.

Another notable track is "Wonder." It's a transparent look at the singer's struggles with faith and doubt. As one who has personally experienced a similar fear, the song is very relatable. The line "Have I f***ed up my head with all the books that I read?" is rightly controversial, although where it's coming from is understandable. The main problem I see with this usage, however, is that it feels less like an honest bleed of emotion and more like an obligation. With so many artists utilizing harsh language in such a short amount of time (and being connected to the same label, no less) it's difficult to see how outside influence was absent from this decision. A different word choice would have made a bigger impact on the listener considering the similar decisions of other artists. It just causes unnecessary controversy.

After "Wonder," the album takes a nosedive into four heavier but uninteresting songs. "Shades of Green," "More" and "The Third Way" in particular are almost a chore to sit through. They're fine songs on their own, but in the context of the album, they lack any defining trait or unique spark. The album picks itself up with the acoustic track "Hold On" and the closer "Black and White." As already noted, these songs end the record on an uncertain note. As the final track fades out the listener is met with conflicting cries of desperation (Savior save me), and doubt (Am I Alone?). They're both satisfactory closers musically.

Aside from the possibility of controversy, the album's biggest flaw is its musical approach. It's far too safe. Tracks such as "Ghost," "Driftwood" and the aforementioned lull in the album's final half are, to put it plainly, generic and predictable. It's such a shame to see, considering the immense talent this band possesses, but How To Be Human is a paint by the numbers effort with little that truly sets it apart.

Overall, The Classic Crime's latest release is a good album by a band that can do far better. Its lyrical themes are worth checking out and some choice songs ("Holy Ghost" and "Wonder") are excellent, just don't expect an album that rivals the best of the band's past.

It's been almost five years since The Classic Crime dropped their last full-length album of originals, called Phoenix; and many wondered what they would get from their newest offering, How to be Human. In a few words, themes range from struggle, doubt, self-loathing, weariness and cynicism, to hope and a faith tempered by the wrestling with deeper questions in life. We get an authentic glimpse into one man's life of searching in all the wrong places for answers, only to ultimately find them back where he started. Lead singer Matt Mcdonald sounds road weary, and weathered. He even speaks of it specifically on the song, "Not Done With You Yet", with lines "and I"m not fine/Because I spent ten years on the road/That made me different." Another highlight for this reviewer is song, and true thesis of the album, "Wonder." Fair warning, though, it does contain the F-word, which may turn off some listeners, and exclude others from an otherwise great song. Other highlights include the desperate plea of "More," and album closer "Black & White," which includes the lyric of the chorus "why don't you wake me up from this wasted life/and in the morning light I will face you" which hints at a double meaning, to then end with the epic and passionate cry of the bridge, "Savior, save me" and then screams of, "Am I alone?" thru to the end. All told, minus a few language choices, How To Be Human is another great addition to The Classic Crime catalog, and a personal contender for a top-ten album of the year. - 4/19/17, Josh Balogh of Jesusfreakhideout.com

The Classic Crime return with the highly anticipated, crowd-funded, How to Be Human for album number five. Opening with the energetic and classic feel of "Holy Water" -- a song about evolution that "cleverly" drops "g*dd*mn" in the second verse. While the words aren't used as blasphemy in the technical sense, saying, "God hasn't condemned anything in His sight," it still feels a bit tasteless in the way it's used. The usage also opens up a theological debate about the world post-Genesis 1:31 and the fall of man. From there, not much else grabs the attention until "Wonder." The slower song that seems to be an honest and inward look at struggles and doubts brings the line, "Have I f***ed my head with all the books that I read?" Despite being an honest and introspective look, with some clever lyrics, all the attention seems drawn to that one word instead. Beyond the two controversial numbers, that unfortunately draw extra attention to themselves for the wrong reasons, not much else stands out on the record. "Shades of Green" is a great rocker that turns up the energy, and "Hold On" is an excellent acoustic track, but the album as a whole just doesn't stand up to the band's back catalogue by comparison. The profanity is extremely disappointing, but controversy aside, the album just isn't all that stellar on its own merits. - 4/18/17 Michael Weaver

In a word, The Classic Crime's latest release can best be described as colorful. This descriptor is a little cheeky (there are a few instances of coarse language that might dissuade some listeners), but it is also accurate on every musical and lyrical level. The vibrancy that runs throughout the tracklist is impressive considering most of the songs are very simple in instrumentation. Although there is a lack of variety in guitar tone and a slight quality dip halfway through the album, How To Be Human features some of the most cohesive songwriting that Matt MacDonald and the gang have ever put out. Much of this is due to the constant theme of exploring different philosophical facets of humanity, which allows for some directly religious lyrics, as well as a transparent look into some darker emotions. The suitable conclusion that the album arrives at in its final line ("Savior/Save me") serves as an appropriate statement to end such a colorful listening experience. - 3/19/17 Mason Haynie