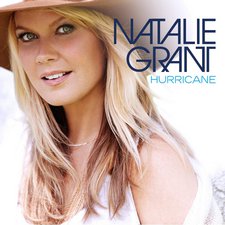 Runaway hit singles can be curious things. On the one hand, they most often transform a virtual unknown artist into a household name, usher in a seemingly endless array of touring and co-writing opportunities, have the most talented musicians clamoring to help out with the next release, and pretty much guarantee that the firstborn child of the performer in question is able to attend the college or university of their choice. On the other side of the coin, as everyone from Bob Carlisle to MercyMe can attest, these breakout tracks often wind up squeezing their composers into a tightly-confined space bound by the expectations of a fickle fan base whose members expect each follow-up single to sound exactly like the one they first fell in love with.

Whether or not she purposely set out to defy this axiom, Natalie Grant seems to have sidestepped any such potential pigeonholing on her latest full-length offering, Hurricane. As just about every fan who tuned in to Christian radio in 2005 will tell you, Grant's breakout single, "Held" - which hit the Top 20 on both the inspirational and mainstream adult contemporary charts, netted a Dove nomination for Pop Song of the Year, and helped spur its parent album, Awaken, to Gold status - was virtually inescapable during the fall of that year. But even though successive singles like "In Better Hands," "Your Great Name" and "Greatness of Our God" were constructed around the same piano-based soft pop template as "Held," Grant was careful to counterbalance these ready-for-radio cuts with acoustically-based modern pop/rock offerings such as "Perfect People," electronica-tinged numbers like "Human," and 2008's "I Will Not be Moved," which can only be described as pure, unadulterated rock and roll.

Indeed, after her recent flirtation with what might best be labeled dance-pop on 2010's Love Revolution, many a fan wondered just what sort of ace Grant might be holding up her sleeve for the latest outing. As it turns out, the first half of the new record isn't so much a case of navigating uncharted waters as it is a matter of revisiting existing strengths. The electronic textures of the two leadoff cuts, "Closer to Your Heart" and "Hurricane" render them fairly close cousins to the Top 30 hit, "Human," from Love, although neither of the slightly-constructed entries equal "Human" in terms of making a lasting impression. These two tracks are followed by "For All of Us," "Whisper" and "Burn Bright," a set of undeniably pleasant mid-tempo lite pop ballads that, unfortunately, pale next to previous similar offerings such as "Better Hands" and "Your Great Name."

Just when all seems lost, though, Grant tosses out a trio of songs as strong as any she's ever written. The letter-perfect "This is Love" positions towering vocals, a rock-solid melody and layers of crunch-laden guitars atop a truly ingenious set of lyrics roughly based on portions of the Prayer of St. Francis - the sum total of which results in what is easily the album's most convincing musical and thematic statement. The voices of Grant and Rascal Flatts lead singer, Gary LeVox, dovetail seamlessly on the slightly country-inflected duet, "Born to Be," a beautiful and moving piece whose whole is, surprisingly enough, greater than the sum of its already impressive parts. And Grant's recent dance-pop exploration comes into full bloom on the infectious faux orchestral "Dead Alive," which answers the burning question, once and for all, of just what a 1 Girl Nation cover of The Eurythmics' "Sweet Dreams (Are Made of This)" would sound like.

The turn for the better, as it happens, is short-lived. The gentle, piano-based lullaby, "When I Leave the Room," while certainly not bad by any measure, suffers from the same overly homogenous character that beset the first half of the release and, unfortunately, brings the momentum created by the previous three cuts to a near halt. The appropriately-titled final track, "In the End," does reclaim some of the oomph forfeited by the lullaby, but the sum total of its hoedown-style musical portion, overly affected vocals and inserted snippets of "The Battle Hymn of the Republic" render it at least marginally difficult not to view as either slightly indulgent or, at the very least, an exercise in irony gone wrong. That being said, except for its copious chants of "Whoa oh oh" (the new "hallelujah," as some have jokingly called it), "End," at the very least, does manage not to sound exactly like every other pop-worship song currently inhabiting the Christian Hit Radio Top 20.

Despite the album's weaker moments, tunes like "Dead Alive and "This Is Love" earn the intrepid Grant points for continuing to tweak the dance-pop formula of Love until she got it absolutely right. In the same way, the likewise top-drawer "Born to Be" offers rock-solid evidence that a full-length collection of country-pop duets might be well worth considering when she sits down to begin work on her next effort. And it arguably goes without saying that the absolutely amazing clarity and strength of the talented Seattle native's singing voice alone are more than enough to recommend Hurricane to her existing legion of followers. For everyone else though, the record is probably best appreciated by downloading its handful of most impressive tracks, given that the new project, as a whole, falls just shy of building a convincing enough body of evidence to recommend its purchase for those outside the existing fan base.

With all due respect, whenever one of Christian radio's top artists releases a record, usually no less than three songs are obligated to follow a certain pattern; one poppy, high-energy song (usually the first track of the album), one encouraging, made-to-be-a-radio-hit song, and one song with congregational worship potential (often, but not always, a cover). Propelled to stardom by 2005's massive radio hit "Held," which led to the first of her now-five "Vocalist of the Year" Dove Awards, Natalie Grant forever endeared herself to the radio audience. But this also obligated her to satisfy her radio consumers by including those three aforementioned songs on subsequent releases, and Hurricane is no different.

Those three tracks are the first three of the album; "Closer To Your Heart," the title track (including an oft-repeated "Oo-oo-oooo" vocal effect that drives this reviewer crazy), and the Hearts of Saints cover "For All Of US" will make proud Natalie's radio audience, but they won't make the album win any recognition for uniqueness. Ironically, contrasting with the message of "Hurricane" (among others), the final track "In The End" contains the lyric "Can't catch a break, you've had your fill of old clichés / Like "Life is hard, but God is Good" / And even though it's true, it won't stop what you're going through / I wish that I could say it would." After those three tracks, Grant is obviously more free to sing about topics she holds more near and dear. "Whisper" is her own take on the lyrical theme concerning God's tendency to show up in the stillness rather than the thunder, set to several catchy pop hooks. Grant's mesmerizing duet with Rascal Flatt's Gary LeVox in "Born To Be" is the vocal highlight of the project, with LeVox complementing Grant perfectly. The piano lullaby, "When I Leave The Room," co-written with Grant's husband Bernie Herms and good friend Nicole Nordeman, addresses the highs and lows of parenting and is the most tender-hearted and endearing song of the album (though it would have been much better utilized as the finale than the penultimate track). And the aforementioned "In The End" is an odd, but satisfying, track which can only be described as a "contemporary hoedown."

While the first ten minutes can get into the "heard it all before" territory, Grant picks up the slack in the final seven tracks, even throwing in some unexpected variety to keep the listeners on their toes. Hurricane might not turn heads, but it is safe to say that Grant has fulfilled her expectations and delivered an overall solid product. - Mark Rice, 10/13/13