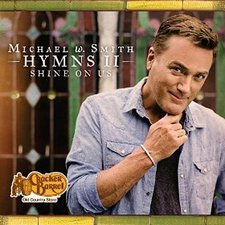 
In 2014, Michael W. Smith released his first album of traditional material in the simply-titled Hymns. Released through Cracker Barrel Old Country Stores, the album was a success and introduced a new side of Smith's music that he hasn't ever really shown before; he traded in big and powerful for simplicity and a piano. And while heartfelt and admirable, it was not particularly outstanding. If someone other than Michael W. Smith were singing those songs the same way they had been arranged, no one would ever think they were particularly special. Thankfully, the album was successful enough that Cracker Barrel brought Smitty back for a second round of hymns, and this time around, we get a much more eclectic, and overall better, collection.

The first thing many may notice about Hymns II: Shine On Us is that not all these songs are what one would traditionally define as "hymns" (although I'm honestly kind of fuzzy myself on the true definition of one). Smith himself wrote the title track, as well as one other song ("Great Is The Lord," from his 1983 debut), and he also covered Passion Band's "Jesus Only Jesus" and Chris Rice's "Untitled Hymn (Come To Jesus)." Smitty even includes an Andrae Crouch cover of "I Don't Know Why (Jesus Loves Me)," a thoroughly gospel song. But each of these songs are definitely what I would call "hymn-like," and perhaps in 50 years, we will be calling them hymns (perhaps this album itself will be the turning point for them to earn that title). But probably most notable is his inclusion of the patriotic song "America The Beautiful." While hymn-like in nature, it feels a little odd that an anthem dedicated to praising America is included on (and, in fact, concludes) an album of praise to God. Then again, "America The Beautiful" can easily be sung as a song of thanks to God for America, so perhaps it fits after all. Plus, it isn't even the first time Smitty concluded a worship album with a patriotic song (Worship Again concluded with "There She Stands" in 2002, in honor of 9/11).

As for the other 10 songs, with 2014's Hymns having included many of the most well-known ones, Smitty reached for some definitely under-appreciated songs. And unlike his mellow, traditional interpretations of two years ago, he seems to have taken my advice and gone for more ambitious, interesting takes on these classic songs. Indeed, Smith has found an excellent balance of reverence for the original songs and his trademark style. Typically soft-sounding songs like "Be Still My Soul" and "Nearer My God To Thee" are amped up a bit more than they surely would have been two years ago. On other songs, the keyboards and gospel choirs run rampant, and still feature more of a return of the big orchestral sounds he is known for. But the variety never overwhelms, nor does one style grossly outshine the other. In fact, the two biggest highlights of the album are totally opposite extremes: "Turn Your Eyes Upon Jesus" and "A Mighty Fortress Is Our God." The former is a quiet, piano-led duet with the wonderful vocals of Audrey Assad, which is a unique-sounding and entirely pleasant pairing. The latter is a wonderfully bombasitic and overwhelming mix of organ, orchestra, and choir of one of my favorite hymns (and by far the oldest on the album, having been originally written in German by Martin Luther himself). Possibly the only real sore thumb of the album is the worthy (but out of place) bluegrass rendition of "I'll Fly Away."

Honestly, this album isn't just a great hymns collection. This is a great album in and of itself. But perhaps the thing that makes Hymns II so surprisingly good is that the modern songs (even the ones I don't really care for in their original form, like "Jesus Only Jesus") fit right alongside, and even enhance, each of these older classics. I have a few personal nitpicks (most notably, how in anyone's mind could "A Mighty Fortress Is Our God" not conclude the album? It makes "America the Beautiful" feel like little more than a bonus track), but it is hard to complain about this collection after such a mellow collection two years ago. I would highly recommend picking Hymns II up, as it might just be the best hymns collection you'll ever get.