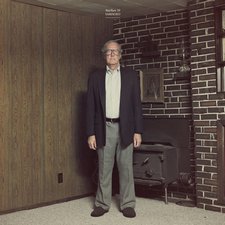 Stop me if you've heard this one: A well known Tooth & Nail artist steps away from the label, goes independent, and launches a Kickstarter campaign. In this case, the artist is Jason Martin under the moniker Starflyer 59. Now, Starflyer 59 has been one of T&N's oldest groups (dating back to 1993), so what does that mean for his music now that he's independent? With his latest indie rock album, IAMACEO, not that much actually.

Starflyer 59's last two albums, Dial M and The Changing of The Guard, were both spectacular albums, and IAMACEO sounds like a slightly darker, mash-up of the two projects. However, IAMACEO does feel like it's a little less diverse than its two predecessors. Although most everything on the album sounds flawless, the predictable percussion and recycled indie rock beats don't make me leap to claim that it's Martin's most original album to date.

However, much of this release is terrific, starting with the title track, which features the serious tone and up-tempo nature of the next nine songs. The easy highlight, "Bicycle Rider," follows next with a brilliantly catchy beat, and other strong tracks include "Is This All There Is," "Red Tide," "Pot Of Gold." But the lulling "Father John" is too slow and too uninteresting to stand out as a ballad, and the finale "My Light" pales in comparison to recent closers like "Lose My Mind" and "I Love You Like The Little Bird."

Obviously, the title of the album breaks down to the phrase "I Am A CEO." Does that translate to his status of living as a songwriter apart from a label? Could it reference his job at reportedly running the trucking company his father left? The lyrics of the title track hint at that, although sailing across the sea and climbing the highest peak give the appearance of freedom, "You're still not in control."

In "Bicycle Rider," the singer discusses the ups and downs of life, but that "blessings come by the black and blue" and "I'll rest my head because God is good." However, vague spiritualism pop up periodically, and the tone of "Is This All There Is" is the most problematic ("When I'm looking up/in the sly/I say 'oh' what is really there/ would it all just stop/if I was no more/or spin like it always has before/is there is all there is").

The best thing about IAMACEO is that Starfyler 59 is back after two and half years, and Jason Martin hasn't skipped a beat. The project is so well finely tuned that it's hard to imagine Starflyer 59 fans not being satisfied with their Kickstarter investment. The lyrics may not always be obvious, but they're worth digging into. Although it's not as varied as previous albums, IAMACEO focuses on a winning formula and delivers ten songs of solid indie, shoegazing rock.

It's been 20 years since Jason Martin and friends started making beautiful sounds with Starflyer 59. Some things are still the same now, and some are different. Martin is still around, and he's still good. However, he's not with Tooth and Nail anymore, as IAMACEO was fully fan-funded and independently released. Once again, we can be grateful for Kickstarter and similar opportunities, because this is good stuff. The overall aesthetic is similar to the prior release The Changing of the Guard, but the finer details are different. There's more instrumental variety, with extras like harmonica and some variety of guitar tones on display. The production is a little fuller and more layered. However, the general energy is similar, being as a whole more low-key than prior releases, like My Island. This album plods along at a deliberate pace, and it's easy to miss the varied melodies and instrumental intricacies hidden in the music. Lyrically, Martin does a lot of musing on life and what's important. The title track sounds like it could be referencing his own personal role as manager of his father's old trucking company, which we've already heard about in "Trucker's Son" from Changing of the Guard. "Is This all There Is" and "Pot of Gold" muse about our place in the universe and the struggle of getting older. "Bicycle Rider" is the album's clear highlight, as Martin ponders the many directions his life and that of others have taken, and finally concludes that "God is good." Experiencing IAMACEO feels like exactly what it should be: listening in on a music veteran pondering what's gone on in his life and what it means. And it's all done with a steady hand and a lovely melody behind it. - Timothy Estabrooks, 1/8/13