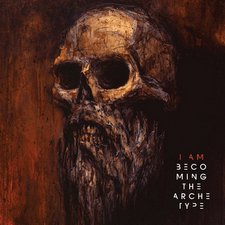 Becoming The Archetype
I Am

Getting a new vocalist is one of the biggest changes a band can go through. Often, the dynamic of the group changes significantly, and there is much trepidation among fans all around. Fortunately, a transition in vocalists can go very smoothly, as was the case with Norma Jean and Haste the Day. Becoming the Archetype is now undergoing such a change, as longtime vocalist/bassist Jason Wisdom amicably parted ways with the band and was replaced by Chris McCane on vocals and Codey Watkins on bass. At the same time, founding member Brent Duckett departed the band for the second time and was replaced by Chris Heaton on drums. They join longtime member Seth Hecox on rhythm guitar and keys and lead guitarist Dan Gailey, who returns after playing on their 2011 release, Celestial Completion. Which brings us to I Am, the first release from this mostly new lineup.

Ironically, the difference in vocalists is possibly the least apparent change from the old Becoming the Archetype. McCane doesn't quite have the unique approach that Wisdom did, but his style is nonetheless very similar. Not to imply that finding a Jason Wisdom sound-alike was ever the band's goal, but if it was, McCane is certainly capable of filling that role. Layered on top of McCane's growls is a healthy dose of Dan Gailey's death-metal shrieks, as was also the case on Celestial Completion. This duo is about as good as you could hope for, and any letdowns present on I Am aren't in the vocal department. Rather, it's the music as a whole that ends up being a partial letdown.

The primary change for Becoming the Archetype is one of general musical approach. They certainly haven't continued the atmosphere of eclectic, slightly weird experimentation that was found on Celestial Completion, which is certainly not a bad thing. Rather, I Am is more of a back to the basics album for the band. The important point, though, is that the "basics" that they're returning to on I Am aren't a sound that we've beard before from this band, but are more of the generic metal style one would expect from a lesser band. If forced to define a genre that I Am fits well into, it would probably be deathcore. While Becoming the Archetype have always had strong death metal influences, I Am adds a lot of metalcore style into the mix, with an abundance of breakdowns and long chugging sections. This leads to an instrumental approach that is generally simpler than what we're used to. In the past, a good Becoming the Archetype track would usually cycle through several different riff themes, often changing mood dramatically within the same song. The tracks on I Am progress a lot slower, with less riffing and more metalcore slogging. Too often songs settle down into a comfortable rhythm of continual double bass pounding with simplistic guitar chugging on top. These sections are broken up by some very technical solos, but the overall result seems to be a loss of variety from track to track.

In all honesty, I found that many of the tracks on I Am run together and are hard to differentiate. The songwriting on individual pieces just doesn't seem to be quite at the level it has been for most of Becoming the Archetype's career. While the musicianship is still certainly top-notch, especially as seen in Dan Gailey's guitar solos, it's disappointing how often the band resorts to tired breakdowns and extended blastbeat sessions when the situation calls for something a little more innovative. The largely uninspiring "The Time Bender" is probably the best example of this problem. In essence, this album pushes Becoming the Archetype closer to the rest of the metal pack, when they previously have been known for being more unique in style. It's certainly still good metal music, it just feels like a little bit less than what they're capable of. Time will tell if this is a new direction influenced by the addition of three new bandmates, or if the new lineup simply hasn't yet had time to start firing on all cylinders and put out their best work. There's no question that Becoming the Archetype has never been afraid to change styles from album to album, and I expect that to continue to be the case. For now, I have to consider I Am as a very good metal album, but not quite up to the quality of previous releases.

Few bands undergo the transformation that metal outfit Becoming the Archetype have and survive. The group currently contains no original members and only one member, Count Seth [Hecox], from their Solid State debut, Terminate Damnation. I Am follows up the band's highly experimental Celestial Completion as an album that is anything but experimental. Instead, their fifth studio album is basically basic deathcore (though some may tag the words "prog" or "tech" on the beginning). Surprisingly enough, the vocals are actually the least notable change in the overall product and the shift from Jason Wisdom to Chris McCane is almost unnoticeable at times. While some tracks stand out, like "The Ocean Walker," "The Sun Eater" and especially "I Am," the entire album doesn't seem as cohesive as previous attempts. As expected, the musicianship is top-notch and provides a better musical product than most other metal bands out there. I Am lacks in two basic areas. One: The album only contains ten tracks and one of those is a very lackluster piano instrumental; they have much better potential than displayed on "The Machine Killer." Two: The overall sound is pretty generic compared to past records. Nothing really jumps out like the harpsichord in Terminate Damnation or the ska/metal interlude in Celestial Completion. Overall, I Am is another solid album sure to please most metal heads. While it may not be BTA's best work to date, it still manages to surpass almost any other artist's album in the same genre. Superior musicianship, even with a more generic overall sound, wins out on this record. Only time will tell if we'll get another original album from Becoming the Archetype or more of the same. - Michael Weaver, 9/24/12