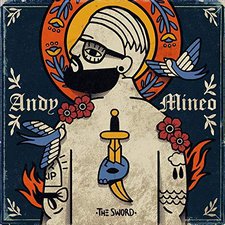 
You may be noticing a trend among rappers lately where artists will drop a few consecutive EPs as opposed to going the traditional full-length album route. Reach Records representative Andy Mineo did just the same with I: The Arrow a couple months ago, and now II: The Sword. EPs tend to leave you wanting more, but if Mineo drops even more good music over a short span of time, I honestly don't care which platform he chooses to do so in.

This seven-song listing begins with the combo track of "Almost" and "There," where crooning and soulful singing are the backdrop for a message ranging from the "what if's" in life to great encouragement, as the hook says, "I got angels flyin' all around, I pray they take me off the ground, I know I got One lookin' down on me." The conclusion is Andy rhyming in a way that showcases his questions in regards to spiritual life, making for a very solid start. "Friends" comes along next with a reminder that real friends call you out on your shortcomings, while still being there for you in a song that is stylistically funky yet honest as Andy raps, "where do I go when my soul hurts?" "None of My Business" comes along, prompting listeners to not care about what others think while challenging ourselves to focus on the stuff that matters. The song has an open book feel and declares a message about gossip that gives us an insight into Andy's life, while he admittedly still takes shots at his haters.

"Crazy" is a short and clever listen with unique lyrics, such as "When I'm a grumpy old man, I'ma love it / I say all the things I really wanna say without the repercussions." The song is fun and thought provoking at the same time, and I absolutely dig it. "Shame" closes out the short EP as the rapper gives fans a very personal song about his struggles. Lyrical honesty is prevalent on this track, with offerings such as "Punishing myself for all of these crimes. And I'm trying to convince God that I'm not a waste of His time. What's wrong with me?," leading to "Only started tasting freedom when I'm being honest. And I learn that when I am weak is when I'm seeing God the strongest." The EP concludes with a thunderous and triumphant chant of "He washes away all of my sin," and it is a perfect ending.

All of that being said, I would be remiss if I didn't mention that this release contains some swearing ("d*mn") once again. You can call it a minor offense and Andy himself did not even rap the words on "Donuts," but this is the second consecutive EP where Mineo chooses to allow this in his music. Personally, I would like to see Andy find a better balance between connecting with secular rappers while still making music for all Christians (including Christian teenagers) to be able to play at all times. I say this as someone who owns every Andy album since Formerly Known. If that doesn't bother you, then this is certainly something worth adding to your hip hop collection, but I'll be leaving that track in particular off of my playlists.