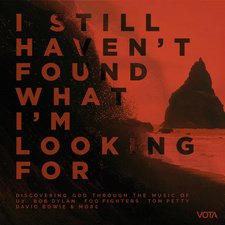 VOTA
I Still Haven't Found What I'm Looking For


The "covers album" is almost a sacred thing in the course of a music career. If approached with reverence, an album of songs from other artists done in your particular style can be a highlight in the musical evolution of a band. And if you do it well, you can sometimes make someone else's work yours, if only for a little while. Jimmy Hendrix covered Bob Dylan's "All Along The Watchtower" and made it utterly his own (to the point that when Dylan played it after that, he stuck close to Hendrix's incendiary rendition). The Beatles covered Chubby Checker's "Twist And Shout" so successfully that many associate them with the song first. Closer to home, dc Talk covered Charlie Peacock's "In The Light" to great applause, and Audio Adrenaline took to covering one classic rock song per album ("Let My Love Open The Door" by The Who, "Free Ride" by The Edgar Winter Group, "Your Love Is Lifting Me Higher" by Jackie Wilson) in their trademark style.

Indie Music stalwarts VOTA (formerly known as Casting Pearls in the early-to-mid 2000's) have released I Still Haven't Found What I'm Looking For as a fundraiser for the band's work with the wonderful ministry Childfund, and specifically, to encourage the sponsorship of at-risk children in Mexico, where the band frequently works.

And as fundraisers go, this one is a beauty, as they chose songs that are hard to go wrong with. But the band (fronted by former Newsboys guitarist Bryan Olesen) also uniquely chose cover songs that displayed a certain kind of spiritual searching in the secular music arena. Starting off with "Where The Streets Have No Name," from the ultimate spiritual searchers U2, Olesen chooses to hold off on the chiming guitar bombast that U2 made their trademark, and for the first section of the song chooses to sing almost a cappella, with just a bit of ethereal keyboard to accompany him. This approach highlights Olesen's fine voice and pays off later as the song finds its level and takes off in the familiar fashion. It's a great opener, and VOTA does a fine job of making it their own.

Taking a big left turn on track number two, Olesen and company cover a similarly searching, spiritual song with Selena Gomez' slow jam, "Nobody." Leaning on the familiar romantic vs. spiritual debate made famous over decades of Christian music, Gomez' lyrics intertwine the spiritual and human notions of love in an expressive fashion that the band makes clear in their straightforward, yet still soulful delivery: "No oxygen, can barely breathe / My darkest sin, you've raised release / And it's all because of you, all because of you / And I don't know what it is, but you've pulled me in /No one compares, could ever begin / To love me like you do / And I wouldn't want them to."

Veering back into mostly Classic Rock territory for the rest of the album, the band capably covers such rock and roll luminaries as Tom Petty, Foo Fighters and the great Bob Dylan. The band's delivery of Petty's jangly "Learning To Fly" is a particular highlight, with Olesen slowing things down and approaching the beloved song in an interesting, spacy way that brings to mind something Coldplay might attempt. The same goes for Dylan's magisterial "Make You Feel My Love," with the poet laureate's lyrics up front, and the music as a background feature.

There is not a bad note here. Petty's seminal "I Won't Back Down" is faithfully rendered, showing that there is no bad way to play the tune. The U2 title track, as familiar a song as there is, is given a unique acoustic guitar treatment that serves the haunting melody and lyrics very well. The band rocks out with David Bowie's "Space Oddity," extending the outer space song with a few timely choices in repeated lyrics at the end, giving the song a nuanced feel that takes the song from a good cover to something that the band interprets in their own fashion. Mumford & Sons' "Wilder Mind" and Pete Seeger's timeless folk classic "Turn, Turn, Turn" (with lyrics taken directly from the Biblical book of Ecclesiastes) come from the complete opposite end of the music spectrum, but the band delivers each in a ghostly, spectral manner that sticks in the brain long after the last notes of the guitar ring out.

VOTA more than passes the "cover album" test with this group of songs, and with the proceeds of this project going towards a great cause, there are many great reasons to snap this album up today.