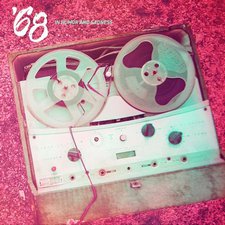 '68
In Humor and Sadness

Scogin thunders forth from the recently announced breakup of the noise/thrash-punk/metal giant The Chariot with his most recent, somewhat mysterious project, '68. "I can live with 'failure', but regret will eat you up from the inside," read the text for the first snippet of this project released to the internet. We had no idea what to expect, honestly. The video opened to a live performance of what turned out to be "Track 8" from In Humor and Sadness.

Teaming up with drummer Michael McClellan, Scogin grabbed a guitar, a loop pedal and a wall of noise and passion to create the rock duo '68. In the same way that The Chariot's The Fiancée began with nary an introduction to the chaos, In Humor and Sadness punches out of the gate mid-scream before launching into a heavy, feedbacked groove in "Track 1: R." Before the track is over, we hear Scogin channel his inner Kurt Cobain on a scream-sung grunge-punk chorus section and then launch into a glorified drum-and-bass groove to finish the song out.

If there's anything undeniable about this album, it's that no two tracks sound the same. You adjust to the noise of "Track 1," and then "Track 2" opens with a chordal, melancholy melody, and then a twangy scream section that would make Dallas Taylor, of Maylene and the Sons of Disaster, grin in his boots.

The opening of "Track 6: T" may as well be a b-side to Nirvana's In Utero, and the middle may become one of your favorite moments in modern indie-metal. "Proper compromise in worship," Scogin bellows over and over, each time trying to find his rhythm in time with drummer McClellan. The music reflects the struggle of coming to grips with exactly what Scogin screams about - finding the proper compromise between expression and listenability. That is what this album is about, if you will - toeing the line between what is expected of you from outside, what you expect of yourself, and whatever is the absolute best of yourself you have to offer.

The album toys with listenability also, for parts of it are leagues more "accessible" than some of Scogin's previous work - but in no way does it sacrifice integrity. "Track 4: R" experiments with minimal (and sometimes jazzy) instrumentation. "Track 9: T" feels like old, backwoods blues. "Track 7: N" may as well be a straightforward, formulaic underground punk song, complete with verses and choruses. That is, it would be straightforward if it didn't feel so dangerous. In fact, that's what sets this album apart from most of its contemporaries this year - every single track takes a risk.

Scogin's lyrics are not as overtly "Christian" as some of his previous work. Nowhere does he shout as he has, "Christ is not a fashion, fleeting away." He doesn't scream, "If I leave this earth tonight may it be said that I spoke my peace; I spoke with the wrath of His grace." But that's not to say that Scogin has strayed from his Christian roots. He speaks of overcoming failure. He confronts false facades. He lays out his heart over the course of ten tracks and finishes mid-scream repeating, "here I am." Scogin here proves that living, music, expression, and even worship is dangerous, and we should quit taking it lightly. Its track listing spells out "Regret Not," but it stands in stark contrast to the slogan of the 2010's: "You only live once, so have no regrets." "Take what you can from this life that will make it all count," he implores on "Track 6: T." It echoes, experimentally, Jim Elliot's famous words: "Wherever you are, be all there! Live to the hilt every situation you believe to be the will of God."

In a time when music has become increasingly about overproduction, accessibility, and intelligibility, In Humor and Sadness exists to display the freedom that comes from writing and playing realness - the emotion of the moment. It is very apparent that Scogin and McClellan printed to tape exactly the thing on their minds at the very moment, without overthinking it or making it "pretty." They wear the noise and the nuts-ness on their sleeves, and it is an extremely good thing. Take a deep breath, because this is a record of freedom.