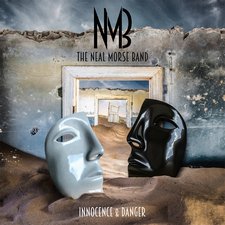 
The hardest working progressive-rock duo is at it again with another mammoth double-album -- well, really two separate albums -- titled Innocence & Danger. Neal Mors (of Spock's Beard fame) and Mike Portnoy (Dream Theater) have been cranking out albums at lightning speed through a slew of different bands for decades know, and one has to wonder if any new inspiration remains, or if a kind of "stream of consciousness" will take over. Not since the first Neal Morse Band album has the band not done a concept album. Indeed, Morse's career (post conversion) could be defined as putting Christian/Bible stories to music. What made NMB's Pilgrim's Progress adaptation, "Similitude of a Dream," the seamless masterpiece that it was, is that it was based directly on Bunyan's classic, and Morse masterfully weaved musical and lyrical themes that flowed naturally from the story. However, the daring sequel, "The Great Adventure" didn't quite live up to its predecessor in part, I believe, because Morse wrote it from whole cloth, and the motifs just didn't land in a structured place. Needless to say, I was intrigued hearing that Innocence & Danger was completely original material.

Innocence focuses on one's dilemma of staying safe vs. following your destiny, while Danger centers around the journey once you've made the decision to go. I should mention right off the bat that the spiritual content here is much less prevalent than in any Morse-penned works of the last twenty years. The theme of courageously following your dreams is forthright, but the overall storyline seems to be missing something. Perhaps there's not enough of a story at all, as there's not a strong protagonist to cheer for, or a fleshed-out motive for the journey, making the whole concept somewhat nondescript. Perhaps this ambiguity was on purpose, to allow the individual listener to input the meaning for themselves, but even so, I can't help feeling let down by the overall lyrical quality. There are many vague synonyms of the same idea, such as, "finding your place in the sun," "finally opening up the door," "make your way clear to this rising tide," and "I'm coming home," along with some juvenile one-liners that bring the level down, such as "I have a fire burning deep inside/And it only exists to rise higher" from "Bird On A Wire," or "How can you live what you don't understand/We've never seen laissez-faire/However you say it I don't care" from "Not Alone Pt. 2." Morse has never been the penultimate lyricist, but I was still hoping for more in that regard.

On the instrumental side, however, the band soars to great heights in every category. Lead single and Innocence opener "Do It All Again" opens to one of Morse's signature majestic themes, before Eric Gillette takes his first shredding opportunity and runs with it -- as if to say, "I am taking ownership of this album." And he does just that throughout, both in guitar mastery and pure-toned vocals, he has cemented himself as world-class, more than measuring up to those playing beside him. The band's sheer music theory prowess and complex arranging continues to be awe-inspiring, yet they know when to move on and keep your attention throughout the hundred-minute extravaganza. The musical wizardry continues into "Bird On A Wire," with one of the most engaging instrumental sections in recent memory. The band's classic rock influences shine throughout the rest of this first album, with the Beatles-esque "Your Place In The Sun," the synth-driven "Another Story To Tell," and the smooth shuffle of "The Way It Had To Be." The acoustic interlude, "Emergence," is a journey all by itself, reminding me of one of Phil Keaggy's mind-blowing arrangements, and it fits nicely as an intro to the lighter-waving power ballad, "Not Afraid Pt. 1."

The inspired reenactment of Simon & Garfunkel's "Bridge Over Troubled Water" sees the band stretching their progressive muscles as far as possible while still managing to keep the bones of the classic intact, making this more of a "reimagining" than a proper cover. The song itself is an appropriate choice as it fits right into the overall theme of friendship and adventure; in fact, this song probably does the best job of conveying what the rest of the album is going for.

That leads us into Danger, which only has two tracks, but in true prog-rock fashion, both are over nineteen minutes long. Each really merits a review of their own, but I'll attempt to summate. "Not Alone Pt. 2" doesn't share much connection to Pt. 1 in word or music, but has the most explicit spiritual content on either album, successfully merging the "leaving to find your destiny" idea, with the only way one can truly find love, "Come find love that has no borders/the gathering Son, you will be His bride." Musically, this track runs the gamut of just about every conceivable genre, but overall is darker and more polarizing, as if to chronicle the separate stops one would take on a journey to self-actualization. In "Beyond The Years," there's plenty of unique instrumental sections to go around, but the feel is more reflective and ethereal, like the contented sigh of one looking back on his life, realizing there was purpose in every moment. I was blown away at the end of section two, "The Far That's Always Near," by the transition from medieval-folk to dystopian-dream, to 70's-acoustic-prog. I could listen to these boys noodle around for hours; mainly because it's so much more than mindless shredding. Every instrument is pointing to the same end, and you can tell each member was together during the writing process, as each has individual moments to shine, yet everything flows cohesively. This is only accentuated with repeated listens. The half-hour is bookended by a beautiful, flute-led theme, one of Morse's calling cards, till it ends all too abruptly (like post-production forgot to fade out?).

To summarize, with Innocence & Danger, The Neal Morse Band continues to find ways to churn out new ideas and themes that both encourage and mystify while avoiding the trap of complacency, with each member contributing evenly and irreducibly. While the storyline could have used a bit more fleshing out, and the lyrics leave a bit to be desired, the instrumental songwriting continues to be second to none. To stray from the "already in place" concept album was, ironically, a bit of an innocence and danger moment for the band, but as is life; it's one that is well worth your time.