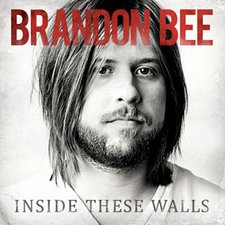 Brandon Bee
Inside These Walls

Does the name Brandon Bee ring a bell? Maybe not the name, but you may be familiar with some of his work, as he's done production work with recognizable artists like Stacie Orrico and Lanae Hale, as well as the latest albums from his Save The City labelmates Benjiman and Circleslide. In addition, Bee also makes a career out of making his own music. His debut album, This Is The Revolution, garnered significant praise from critics, and after releasing a follow-up EP, is ready to drop his sophomore record with Save The City Records, Inside These Walls. Full of pop hooks and honest worship, Bee may gain some more praise for this one as well.

Bee's sound is full of strong musicianship, production quality and heart. All qualities that make for a sure-fire attention-getter for those who like worship music that tends to be more upbeat. Inside These Walls has its slower moments as well, but the majority of it is upbeat pop rock that's just waiting to be picked up by stations like Air-1 (while the rest would easily make it onto K-Love). Some songs seem like they may have been influenced by bands like Fair and Switchfoot (in fact, some of Bee's vocals in "Radiant Sun (Give Thanks To The One)" and "Helpless," in addition to others, give off a Jon Foreman-esque vibe). Bee also shows some Jars of Clay influence in his tunes as well, such as in the song "Hands of Yours."

Inside These Walls features a few guest songwriters along the way. "Helpless" gets a little help from Circleslide frontman, Gabriel Martinez. It deals with the bigness and greatness of God, and how silly it is to center one's life around living the high life. The other big name songwriter that offers some of his artistry is Scott Krippayne, who has written songs for other Christian artists like Point of Grace and FFH. For Bee, Krippayne co-wrote the opening song, "The Everlasting Song," as well as "Maybe It's The Last Day," which both turn out well. On his own, Bee's lyrics are well-written, and full of hope and worship. He may fall into some standardized territory on occasion, but he's one of the better songwriters in his genre today.

Musically, there seems to be more borrowed sounds than original ones, and the artists Brandon Bee seems to be emulating are the ones that pop rock artists probably should be emulating, which can sometimes leave his music in their shadows. But after a few listens to this newest offering of his, it ends up sounding alright, with some definite potential. Inside These Walls may lack some creativity and innovation, but at least his talent shows in the midst of it. Bee will no doubt get better as time goes on, and when it comes time for his third studio album, it should be pretty good. Inside These Walls is recommended for fans of Jars of Clay and Switchfoot.