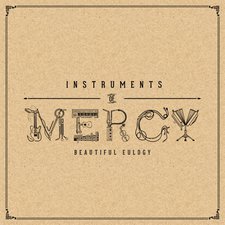 Last year, the world was introduced to the newly-formed hip hop trio called Beautiful Eulogy, consisting of three indie hip hop veterans Braille, Odd Thomas, and producer Courtland Urbano. Their stunning debut, Satellite Kite, provided precise and theologically dense raps over soft, eclectic, and brilliantly mixed beats that appealed to both hip hop fans and non alike. Their mission: "make mention of the Gospel and the resurrection, exist with the tension of trying to creatively display creation fall and redemption, contextualize and set the context for the text that's divinely inspired." Now in 2013, with Instruments of Mercy, their attention has turned to God's mercy, and the result is an album that is in every way no less than the equal of their debut and, in some areas, is simply superior.

Much like Satellite Kite, Courtland Urbano has painted a splendid experimental soundscape here with inspiration drawn from both indie genres and folk for his beats. He often makes used of natural and seemingly innocuous sounds such as running water, chirping, footsteps, or rustling leaves to go along with more traditional instruments like pianos, strings, guitars, keys, and percussion. Somehow, it seems more melodic than the trio's debut, perhaps to mesh with the tracks which feature sung verses and choruses. "Cello From Portland" (a play on the name of the opening track of their debut) features sung harmonies from Braille and Odd Thomas. Most prominently, the sibling duo Hello Abigail is featured on the title track, and Josh White takes the chorus on the album closer "Acquired In Heaven." Also like their debut, an impassioned message from Art Azurdia in "Blessed Are The Merciful" (the pastor of the church the trio attends in Portland), talking about displaying mercy in our lives, provides a spoken interlude and an excellent opportunity for self-reflection.

But this is first and foremost a rap album, as such the most prominent highlight is Braille and Odd Thomas's rapping. There is unfortunately no back-and-forth rapping on this album (like "Entitlement" from their debut), but everything else you expect and love from these two emcees is there. Braille's succinct spitting and Thomas's rhythmic rhymes are in present in full force and give power and weight to their words even in spite of the rather mellow beats. A couple excellent featured emcees also crop up. Fellow Humble Beast artists Propaganda on "Symbols and Signs" and Eshon Burgundy on "Organized Religion" provide verses with their own respective strengths. Spoken word artist Jackie Hill also makes an appearance on "Organized Religion," as does the female alt hip-hop artist MARZ on "You Can Save Me" (not to be confused with the rapper from Chicago).

Lyrically, absolutely nothing is wasted. In all my listens to the album, I did not note one superfluous, unnecessary, or badly-written line. In "The Size Of Sin," Odd Thomas takes the reins, rapping "We're the seed of a broken family tree branching out limbs of disease. Look at this mess we leave! This weight of wickedness is heavy as lead and trying to catch its descent is like stopping the falling rock in a spider's web. Its thin silk thread begins to snap and all that's left is the residue that sticks between cracks." In the next track, "You Can Save Me," Braille spits, "Can mankind make an image of a god and be convinced that the god they imagine in their mind is a god that exists? But if God made man, how can man make a god and make a claim that God is confined to fit within a frame? How can mankind decide how God should be identified? Can you alter the truth if you accept or deny? Do the stars disappear when the blind look at the sky, or do they simply fail to see what was there the whole time?" Propaganda and Eshon Burgundy both also provide highlights for verses in their respective appearances. Simply put, track after track, line after line, concept after concept, this album never fails to take its audience or its content seriously and maturely, always pointing back to our depravity and God's mercy. Some might disagree with the theological content (the trio does, after all, come from a Reformed background, so other traditions might have theological qualms), but that is simply besides the point; frankly, this album might have more legitimate theological content than all the other albums I've heard this year combined.

It is hard not to marvel at the sheer talent of these three individuals, whether it is in the crisp vocals, wonderful production, or the dense and theologically provoking lyrics. It is also hard not to marvel on the fact that Beautiful Eulogy managed to improve on a project as good as Satellite Kite. But an improvement Instruments of Mercy is, and to add to the astonishment factor the album already has, like all other Humble Beast projects, it is available as a free download of the Humble Beast website upon release. Whether you like hip hop or not, do yourselves a favor and check this album out (along with all the other excellent offerings from Humble Beast, and there are plenty).