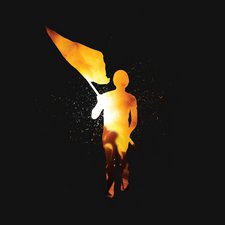 
Rapture Ruckus' Invader EP's were designed to be two separate projects. The first volume was created in the group's typical hip-hop/pop style while the second featured a raw/rocking production. Fusing these two EPs together and throwing them into a volcano may sound like a hot mess, but the result works surprisingly well.

Invader starts off with the fan-favorite "In Crowd," which boasts a bouncy beat, rich synths and a guest appearance from former Family Force 5 lead vocalist, Soul Glow Activatur. The message of the song is simple: don't define who you are based on the opinions of others, but on your own outlook. Ruckus frontman Brad Dring goes on to explain in the disco-flavored "Everybody Get Up" that God wants you to pursue a life of fulfillment, not one of self-destruction. Throughout the album, Dring's rapping flows smoothly, seamlessly shifting between ridiculous and blunt lyrics. For example, the rap song "Invader Part 1" references Transformers and Star Wars, while skillfully delivering an explicit gospel message. Most songs have significant depth, but there are a couple nonsensical tunes, like "Boomerang" and "Mr. Roboto" (not a Styx cover). "Minefield" has some crunk rock flavor with its distorted guitar riffs and covers the vital topic of spiritual warfare. The guitars and synths throughout Invader can be repetitive, but the hooks are so strong that it's easy to overlook this minor flaw.

New to the Invader series, the song "Volcano" uses a volcano eruption as a metaphor for spreading the light of Christ, encouraging listeners not to let their faith be dormant. Musically, "Volcano" fits with the Volume 1 EP and features a soaring chorus courtesy of Jonathan Thulin (be sure to check out the cinematic music video). The Matthew Parker rendition of "Volcano" is given a creative dubstep treatment which makes it a highlight of the remixes. It's also worth noting that the three remixes from Volume II fit better on this album then they did on the EP, however, "Fire in the Night" is still longer than necessary as it stretches a three-minute song to five minutes.

Combining the Invader EP's and "Volcano" may be an annoying marketing move, but ultimately, it's a nice package for those who have not picked up either EP. The tracklist order makes sense, with the regular tracks of Volume I and II playing back to back, followed by their collective remixes. "Volcano" might have been more effective before "In This Together," but its presence among Volume I is the right idea. After listening to this album, it's hard to tell which direction Rapture Ruckus will take their music, but whatever route they go, it's obvious it will be a fun journey.