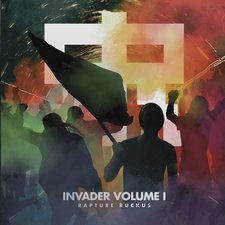 After a successful IndieGoGo campaign, hip hop/dance trio Rapture Ruckus reteams with BEC Recordings to deliver the long-awaited follow-up to their 2011 full-length album, Open Your Eyes. Most US listeners first heard of Rapture Ruckus as primarily the venture of vocalist/writer Brad Dring when they released their debut EP with BEC a year before. Since then, Brad has been touring the US extensively with a live band and winning over new fans across the country with their catchy, hopeful and infectious anthems. Invader, Volume 1 is the first of two promised releases this year, and if Volume 1 is any indication, the whole of the two EPs together looks to be a highlight of 2014.

The opening track and first single, "In Crowd," was first heard when Rapture Ruckus released a free live version on their website. Within the past year, a studio version and music video were released, with Family Force 5's former vocalist Solomon "Soul Glow Activatur" Olds making a special appearance on the track. That version kicks off Invader and it's a fantastic opener and a great anthem for anyone who's ever felt left out. Ironically, it's a call for unification of those who are generally the last ones picked and left on the sidelines, "Put your hands up, if you gon' make it loud / And say NO we're never gonna be in the In Crowd / And say NO we don't care what they say / I don't wanna be you, so I'll do it my way."

"Everybody Get Up" is a great hip hop-based dance track with a bit of an 80s flavor where Brad raps some of the verses in a similar fashion to artists like B.Reith. The song also encourages the listener to stand out from the crowd and seek fulfillment in Christ and not the world, but it also makes for some quirky if not a little bit crass lyrics like, "So tonight you want a little bit of carefree living, ha / Like the people on the screen at the cinema / Find a drunk girl who isn't even really into ya / To have sex with you in the back seat of your rental car / Is it even really fulfilling ya, or is it ultimately killing ya? / Has it given ya a virus that'll wreck your balls faster than Miley Cyrus?" However, the next verse shows what Brad's point really is, "God ultimately knows what's up / That's why He doesn't really even want you up in that club / With ya bottle of bub, while you're twerkin' it up / Cause those men looking at you they ain't looking for love." Dring mixes this kind of bluntness with fun and blatantly spiritual lyrics throughout the EP.

"Head Held High" is a dance ballad akin to something you might hear on a recent TobyMac album, but Rapture Ruckus pushes it to ballad status without taking it a step further to over-produce it with too much glisten. In the end, the track becomes an encouraging one as Brad sings, "...you're overwhelmed by life / Don't forget to fight, you can make it right / Keep your head held high / You got a fire deep inside / Light it up and let it shine / You don't need to hide, you were born to fly / Keep your head held high." This chorus utilizes some very familiar imagery, but the verses tell a story of a girl looking for love and going about it the wrong way. "Invader (Part I)" is a straight-up rap track that serves as an interlude and feels a bit unfinished (hence the "Part 1" perhaps?) but it is the most straight-forward track spiritually on the record, "...the power has a name / His name is Christ Jesus and He can't be contained / More than we can fathom, more than we can grasp / Our God shall reign forever, He shall never be surpassed ... He is the alpha and omega / There is none greater..."

"Carry Me" is an almost-ballad but upbeat track that sounds a lot like a slowed-down version of "Tonight" from Open Your Eyes in the verses. But the chorus, featuring guest vocals by David Dunn, channels a power ballad energy as he sings, "When all I ever see is hurting / When all I ever feel is burning / When the wind blows, when the raves roll / Will we make it home? Carry us through this storm." It's got a signature Rapture Ruckus feel but takes it a little further and is one of the standout tracks on Volume 1. "In This Together" is a little similar, but proves to be another solid anthem as it takes the album out in a positive and equally catchy fashion. BEC's Shuree adds her soulful vocals into the mix with Brad's and some gang vocals before getting a verse on her own. David Thulin's remix of "In Crowd" closes out the EP; although it's hardly as good as the original version, it's a nice little bonus regardless.

Invader, Volume 1 is a great new entry into the Rapture Ruckus catalog. Fans of their previous offerings will find a lot to love about Invader, Volume 1, even if it feels a little short after having to wait three years for a new project from the group. There is some definite growth and maturity noticeable from the previous record to this one, despite some lyrics still bordering on corny (But forgivably so. It's hard not to have a soft spot for Star Wars references). If you're looking for some fun and encouraging new hip hop/dance pop music, definitely check out Rapture Ruckus' latest.