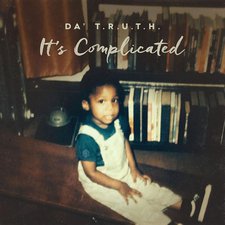 
Back in the day, when Cross Movement ruled Christian hip hop, CM signed Philly native Emanuel Lee Lambert Jr, AKA Da T.R.U.T.H. So to say that T.R.U.T.H. has been around for a while and making lots of music is an understatement. Even with a solid rap history and banging hits like "Hope," "On Duty" and "Alive," T.R.U.T.H. has still been able to fly under the radar of many hip hop fans while dropping seven full-length releases. This year's album, titled It's Complicated is sure to be one of the more unique rap albums of the year.

As said, this album is guaranteed to be one of the more unique albums, and factoring into that is the addition of the conversation between T.R.U.T.H. and Dr. Ravi Zacharias throughout the album. The conversation starts from the beginning with "Meeting of the Minds" and will continue for the bulk of the release. T.R.U.T.H. asks complicated questions and makes statements while the dialogue between the two flows over solid beats and points to a Biblical point of view. "Mixed Signals" is a good example of this as T.R.U.T.H. spits, "Dawkins said He full of wrath, Sodom and Gomorrah in a body bag, Jesus was there for the poor and sick, compassion in His heart when He was feeling bad," in a song that flows nicely laid over some seriously good beats. The idea is conveyed that we as people simply cannot fully comprehend God, and in the end we aren't God. "Judge" follows with another hard home-hitting focus on what Biblical judgment is and begs the listener to understand that, while there are indeed hypocritical Christians, not all of us are and to trust God for God, not the flaws of His followers. Other standout tracks would be "Religion," where T.R.U.T.H. spits hard "know that the truth is the truth whether we believe it or not" and "Color Purple" is a purely raw, open and in-depth look into the rapper's personal life, struggles and history.

However, not all is great on It's Complicated. Somewhere around the middle of the album, the music turns into something unpleasant to the ears. "Heaven," "The Reason" and "Copycat" all contain a solid focus as far as the message, but often contain disjointed flows and hooks that are too simple to be left on this release. With those handful of filler tracks, this album goes from great to just good. That being said, the first half of the album is pretty awesome and this project is far more Biblically based than most of what is heard in CHH today. T.R.U.T.H. can spit with the best of them - though I do wish he rapped faster at times - and most of the production is worthy to be played at any house party. If you are a fan of hip hop or are just looking for more Jesus in your music, this is worth picking up.