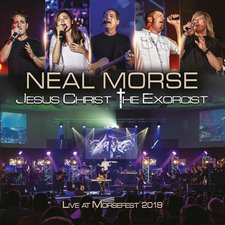 
Journey through the life, ministry, and passion of Christ through a progressive rock lens, as genre stalwart Neal Morse releases the 2018 live performance of his colossal musical Jesus Christ The Exorcist, courtesy of Frontiers Records. Besides the obvious allusion to 70's rock-opera "Jesus Christ Superstar," I can't think of anything that quite parallels what we encounter here. Casting a veritable "who's who" of rock vocalists (John Schlitt of Petra and Matt Smith of Theocracy to name a few), each character takes a role in the Jesus story, much like you'd see in a broadway play. Though there's only sparse choreography and acting, I found these few gestures to add to the overall story, between the interplay of the disciples, to the sprawling demonic "legion" (more on that later).

While Morse is well-known for his complex musical creations, the flavor of this album leans more toward straight-forward hard rock with a healthy dose of power ballads, surrounded by larger-than-life instrumentals, and sprinkled with showtune-esque grandiosity. One of Morse's greatest strengths, in his many years of crafting concept albums, is his ability to dictate the overtones of the music to emulate the storyline. This album proves no different, beginning with the hope and healing of the promised Messiah, yet becoming progressively darker as Jesus nears His execution. These emotional ebbs-and-flows, along with his uncanny procuring of hummable melodies, keep your attention fixed during the over two-hour runtime. I was shocked and impressed seeing guitar beast Eric Gillette behind the drum-kit this time around, handling the most technical moments with ease, at times commanding your attention, as in the full-throttle "Get Behind Me Satan." In lieu of Gillette, Paul Bielatowicz takes over guitar duties, and sweep-picks his way through solos at lightning fast speed, his facial expressions proving he's enjoying every minute. It seems prodigy musicians grow on trees around Mr. Morse. While I'm on the topic, in the midst of all the hubbub and high-profile cameos, local talent Talon David (Mary Magdalene) ends up stealing the show, her vocal demeanor effortlessly shifting from the sleazy and possessed "Woman of Seven Devils," to pure relief in "Free at Last," to bewilderment at the sight of the resurrected Jesus in "Mary At The Tomb."

Every narrative of Jesus showcases certain aspects of His ministry more than others (this is seen in the biblical gospels themselves). In this retelling, a strong emphasis is placed on Jesus' exorcisms and authority over the demonic realm. Show highlight "The Mad Man Of The Gadarenes" exemplifies this, using a mind-bending polyphonic acapella section, one of Morse's calling cards, to portray the infamous "legion" begging Jesus to be sent into the pigs. In our current socially-distanced situation, it was strangely cathartic to see a mass of demons crawling around each other with no fear or trepidation, but I digress. Overall, the re-working of the biblical narrative varies little from what we find in the gospels (thankfully), as Morse seems content to tell the story as-is, which makes the few modern applications hit even harder, such as the timeless message of "Love Has Called My Name" and the climactic duet, "The Greatest Love Of All."

With Exorcist..., Neal Morse once again frequents his friend the concept album, and proves to be a master assembler. What's natural writing for Morse & Co is unique to the Christian music world, and deserves consideration. The sonics are powerful and the story unadulterated. Chalk up another diamond in the rough to Morse's ever-growing list.