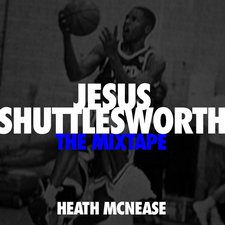 Though there are plenty of very talented artists making music these days, there aren't many with the work ethic and grind of Heath McNease. His days are spent eating, sleeping, performing, and making music, with very little time spent on anything else. February 2013 marks the fourth, high-quality release from McNease within a twelve-month timespan. This time, it's a lengthy, twenty-one track mixtape called Jesus Shuttlesworth.

Jesus Shuttlesworth is a mixtape in the same vein as McNease's mixtape with Playdough back in 2011, Wed, White & Wu, in the sense that McNease is rapping over other artists' beats. But as Wed, White & Wu was all from the Wu Tang Clan, this latest comes from all kinds of different artists. We get anything from trap beats to R&B tracks to 90s rap and hip hop; in essence, McNease shows us that there's no beat that is beyond his ability to master. One of the interesting things that you may notice (whether you're familiar with the originals or you go and look them up on Spotify) is that McNease will even borrow the original artists' flow or rhythm on occasion. Such is the case in the opening track "40 Piece Meal Deal." The beat comes from Busta Rhymes' "Gimme Some More," and McNease uses the same speed, timing, and versatility that Busta uses (he even uses the same sort of talking intro, though that part is a little hard to hear over the music).

The seasoned fan of mainstream rap will have a field day with Jesus Shuttlesworth; McNease hand-picked some of his favorite beats of all time, including tracks from well-known artists like Cypress Hill, Eminem, Jay-Z, Missy Elliott, Kanye West, and more. There are also tracks originally by Aaliyah and Sublime (though Sublime will go down as a ska band, their track "Doin' Time" is hip hop-ish). In addition, McNease pulled out some pretty obscure stuff (at least, artists I've never even heard of), such as Asher Roth, Alpha 5.20, Danny Brown and Dopehead, and East Flatbush Project. Despite the varying genres and subgenres of the different tracks, I don't know if there's a single one that I didn't like or that didn't work for McNease's raps. Regarding only the beats, my personal favorites are "40 Piece Meal Deal," "99 Problems (Shootin' Bricks Ain't One)," "Don't Wake Daddy," "Skibbidy Bibbidy,""Dingy For A Benji (Resurrection Paper)," "Baby Mama," "Bridges Need Love Too," and "Amare Stoudemire."

McNease's three projects last year - Thrift Store Jesus, The Weight of Glory, and Losing Daylight - were all pretty serious efforts, with the least amount of joking and humor absolutely possible. It was great to see that side of the artist, but with Jesus Shuttlesworth, McNease finds himself relaxing a lot more, and letting loose his "wild side," if you will. McNease is a smart rapper, with quick wordplay and a veritable, near-encyclopedic amount of socially-relevant quips, metaphors, and references. Whether he's using samples from 30 Rock in "Slick Back Lamar," reminding us all of Antoine Dodson in "Inflector Gadget," or making the ever-so-slightest reference to Billy Madison in "McNasty!" (I'll let you find it yourself), there's just no end to the rhymes he can come up with on any given day (one of my favorite sections is the end of "Rick Warren Money"). He does some quick rapping in a few tracks, including "Skibbidy Bibbidy." Ironically, but intentionally, McNease talks a little in this track about the idea that "rapping fast = rapping well," and how it's simply not true. He's joined by The King's Offspring member Heir Jordan, whose flow keeps the same pace as McNease. Heir Jordan also represents KO well with his humor ("I ain't even taken my Ritalin, but I'll take you on a date, eating steak at a Bennigan's, nah wait, I couldn't even pay for the dinner mints, I'm coming to your place and invading the fridge again") as well as similar thoughts on the fast rap concept ("That's absurd, put some meaning behind it, just 'cause it rhymes doesn't mean you should rhyme it"). Of course, these guys can rap quick, and McNease does take several opportunities throughout the mixtape to do so ("40 Piece Meal Deal," "Dingy For A Benji," etc.).

Most of Jesus Shuttlesworth involves slower rhyming. Heir Jordan's KO brother, Isaac Knox, joins McNease later in "Abe Froman." As KO's producer/beatmaker, Knox did all the recording and mixing for Jesus Shuttlesworth, but he's a terrific rapper as well. During the laidback beat (originally from Robin Thicke), Isaac comes in and shows us all the rapping powerhouse that he really is. I really like that he's clever with his word play and rhyme scheme, but he's also rather eloquent and enunciates his words very well. He raps clearly and powerfully, and he really wants you to know how good of a basketball player he is ("That arena door's the kingdom for this conquistador, get the MVP award, I'm the one they screaming for, to what they speak is more freaking hoarse than a speeding Porsche"). In addition to The King's Offspring members, what Heath McNease rap album would be complete without an appearance from the one and only Playdough? Playdough shows up for "PT Cruiser Brigade," a clever play on the original track, "Bruiser Brigade" from Danny Brown. It's a humorous track about rolling shotgun in PT Cruisers with your mom, who, according to Playdough, is "jammin' Deepspace 5."

Before the official release of Jesus Shuttlesworth, McNease had released five or six tracks through Bandcamp, and from those tracks, high hopes arose. And of course, just as you can expect from the artist, those hopes were met. This mixtape is stellar. McNease's brand of humor and satirical musings meet up with his clever rhymes, melodies, and flows, and produce some of the finest hip hop you can find. Pick this up for free, or leave him a donation if you feel so inclined, hear some recognizable beats with new life in them, and get ready to have twenty-one fantastic tracks stuck in your head.