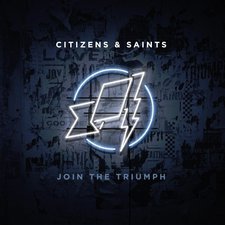 Citizens and Saints
Join The Triumph

Groundbreakers Citizens & Saints (formerly known simply as Citizens) made some beautiful waves with their 2013 self-titled debut. A little over a year later, they are giving listeners another batch of songs with their sophomore release, Join the Triumph. But does this album meet the standard set by its predecessor or is it a victim of the sophomore slump?

The album opens with a modern rendition of the hymn, "The Strife is Over." C&S utilizes some heavy but well-placed synth throughout the track, giving the song a more aggressive yet reverent sound. This same treatment is given to the following track, "There Is A Fountain." These are such strong opening songs, but being side by side makes them lose their effectiveness since they're both hymns and have a similar sound. On the flipside, "Be Thou My Vision" and "Before the Throne" receive a more deconstructed sound. Those wanting a more contemplative feel will find both of these songs to suit your mood.

For those seeking some new original songs, "You Brought Me Back to Life," "The Mighty Hand of God," and "Greatly To Be Praised," are all excellent tracks but the over-abundance of synth in the album seems to drown them out. Each of these songs feature excellent lyrics and very beautiful music, but they just seem to reside in a proverbial box. However, a standout original track is without a doubt the melancholy "You Have Searched Me." The lyrics are hard-hitting as lead singer Zach Bolen belts out amidst epic drums, "Your kindness leads me to repentance. Your grace assures me to trust in You. Faithful savior, You restore me. My life is yours, I belong to You." The music is arranged beautifully and feels almost like it was scored for a climactic scene of a war movie.

The album does feature additional covers of former-label mates' original songs: "Oh! Great is Our God!" from The Sing Team and "The Gospel" by Ghost Ship; both of which were penned by now band member Brian Eichelberger. If listeners have not heard the original recordings of these tracks, they might love them. However, if they have heard the originals, they might not appreciate these as much. Both renditions have faster tempos and feel sloppy. The music is tight and very creative but feels too rushed and thus can't compete with the originals.

Overall, Join the Triumph is a great collection of songs to be used within the context of corporate church gatherings, but not much more than that. Sadly, the album doesn't surpass the benchmark that the band's debut had set: by no means is it a sophomore slump, but it feels like somewhat of a formula was drawn from the previous album and slightly influenced this release. Still, worship leaders may find themselves using a large number of these tracks in 2015 - and churches will join with Citizens & Saints as they sing songs of triumph.

Just last year, indie worship group Citizens blew us all away with an intensely-good worship album that strayed outside the lines, but stayed close enough to them to attract fans of the standard worship sound as well. One gorgeous Christmas EP and a name change later, Citizens & Saints is at it again with their second full-length album, encouraging their fans to Join the Triumph. With their name change also came a sound change. While it's still the same band to an extent, the sound is far more electronic than it was before. There are still indie and alt rock sounds all over the album, but synthesizers are the name of the game, for the most part. In addition, songs like "You Brought Me Back To Life," "The Mighty Hand of God," and "The Gospel" bring a more radio friendly approach than what was previously offered by the band. These songs are super catchy, but seem somehow less appealing than what was expected. One thing I like about these guys that they did retain for this release, however, is the song structuring; Citizens & Saints is a band that is really in tune with the hymns of old, and a lot of their songs are written to sound like hymns (melodically, anyway). There are some clear stand-out tracks here, such as "There Is A Fountain" and the 80s-inpired "Greatly To Be Praised." Though the music of Citizens & Saints doesn't have quite the same charm as the music of Citizens, Join the Triumph is still a rather decent album; it's just not the one fans may be anticipating. - Review date: 11/3/14, Scott Fryberger

As if a name change wasn't enough of an identity shift, the sophomore album of Citizens & Saints offers up a such startling amount of synthesizer-led music that if one didn't notice Zach Bolen's vocals or the unique lyrical style introduced on their self-title debut, they would undoubtedly question if this was the same band. That said, there is no real drop in quality on Join The Triumph, as C&S still approached the project with a creative bent rather than try to appeal to the masses. Indeed, when all is said and done, aside from often-times overbearing synthesizers, there is no reason to dislike Join The Triumph. - 11/10/14, Mark Rice of Jesusfreakhideout.com