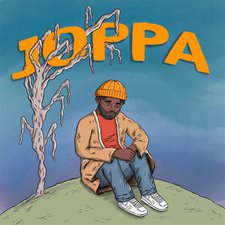 
Eshon Burgundy is a name that doesn't come up among casual CHH (Christian hip hop) fans, but among the more immersed, they know he's a force to be reckoned with, your favorite rapper's favorite rapper. Joppa is his first album in 5 years, and it meets all expectations.

Thematically, Eshon is reluctant to tell the nation to repent, just like Jonah. Musically, the instrumentals have a classic, static vibe, with heavy sample-based production and boom-bap beats. However, it doesn't sound outdated; it sounds vintage. Eshon is known for his lyricism, and this album is lyrically heavy, talking in depth about topics like sin, racism, repentance, heresy, and theology. In fact, many tracks masterfully interweave most or all of those topics.

Highlight tracks include "I Felt That," "Hangmen," and "Street Dreams." Some of his most powerful lyricism are exemplified in these, such as the hook of "I Felt That" where Eshon raps, "When David told Saul 'I could have killed you but I respect you as my king' I felt that, when Daniel said 'it's not me but it's God who interprets these dreams' I felt that." On "Hangmen," he spits the ever-relevant line "don't defend those who refuse to repent for crossing the line." This is just a small taste of what you're in for.

The main downsides is that this isn't an album with radio singles. These aren't songs to play when hanging out with friends or throwing a banquet. These are contemplative songs. Additionally, there are some areas on the album that feel outdated, such as the use of air horns. It's for those reasons I can't give the album 5 stars, even though it IS one of the freshest CHH albums released in a long while.

If you're a fan of mainstream sounding, upbeat, party CHH, you might not fully appreciate this album; if you're looking for non-sugarcoated, theologically deep, lyrical hip hop, Joppa is what you've been looking for.