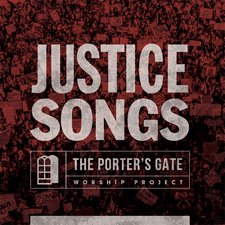 
The Porter's Gate have made a name for themselves as a prophetic collective that writes music designed for what the Church as a whole needs to hear and then sing. They may not yet be played in every Christian household, but some of the most influential worship leaders are attached to this group - from Audrey Assad to Josh Garrels to Liz Vice. The Church and the rest of the world have experienced rapid change and trauma over the last couple of years, and Isaac Wardell's community of porters has been there to address it. With 2017's Work Songs and 2019's Neighbor Songs, The Porter's Gate have been healing and equipping saints through acoustic hymns and stylistic variety. So in a year as tumultuous as 2020, what does the Church need to be doing? Perhaps properly lamenting over the pain of a pandemic and simultaneously fighting for racial justice is the answer. Two shorter projects centered on these concepts were recently finished through crowdfunding, and the first of these is Justice Songs, an album that is somehow both more energetic and more sparse than what we're used to from this group.

The sonic difference is obvious from the opening seconds; a bluesy piano part drives "His Kingdom Now Is Come (Behold! Behold!)." The lyrics remain directly drawn from Scripture, but this time around, they feel much more directional and pointed in order to match the spirit of the music. This opening track displays the main palette of the record: call-and-response verses, hymn-like structures, and surprisingly prominent drums. The blues-and-gospel feel is further cemented in "We Believe in the Name," with grooving bass lines and touches of organ. These choices make for a fairly different aesthetic compared to their previous releases - vocal standouts and memorable melodies have been traded in for texture and mood. Despite being more rhythmically rooted and expansive, the record sounds fairly empty. The production comes across as even more live and less layered than usual. The emptiness also comes from the compositions themselves: these songs often end before they get very far. Many are shorter and don't expand beyond the verse-chorus formula, making it hard to distinguish between them sometimes. The record feels like more of a thematic compilation than a collection of songs that were developed on an individual basis. The momentum is hard to follow, and it makes for a less cohesive listening experience, but that could be because the mini-album is divorced from its lamenting half. We'll have to see if the two go hand in hand once Lament Songs is released.

Justice Songs is still unrelenting in its counter-cultural messaging. "Justicia" doesn't pull any punches in its critique of the systemic corruption we find ourselves mired in ("They're meant to protect us, but kill us instead/And they're meant to defend us, but step on our heads/The watchmen were sleeping and left us for dead/And we cannot stop 'til this comes to an end"). If those ideas feel too harsh for Sunday morning, that's probably more indicative of what an individual church is uncomfortable with, but Wardell provides biblical support for these thoughts. Fighting for justice is a crucial step on the way to peace; there is no room for people like Zacchaeus and those on the outside without the paradox of realizing that what we thought belonged to us belongs to all. This gospel-oriented approach is the foundation of the creativity behind The Porter's Gate, so it's still a refreshing and necessary listen that is clearly meant to challenge us. These are the types of songs that we should probably be singing in service right now; it just sounds like a little more ripening would have done the themes more justice.