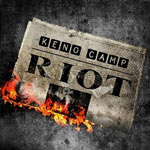 Keno Camp is rap-based group hailing from Compton, California, home to the original West Coast rap sound. Keno is releasing their debut album courtesy of Tendency Records, and though they carry some of those old school West Coast beats on this album, they're also attempting to create their own sound and appeal to audiences all over.

The first few tracks on Riot are a mixed bunch of songs that all contain great beats. The production is mostly solid throughout the entire album with a variety of an old school West Coast flavor and some modern unique styling thrown in. The rapping in this first set of tracks is decent and has a nice flow, but some songs contain mediocre hooks, "I Ain't The One" being a prime example. Each of the first five tracks are pretty good, but don't bring anything too exciting or exceptional to the table. However, the lyrics point us to follow Christ and speak some noteworthy truths.

The latter part of this release is a step above the first half. "If I" and "Cocktails" deliver some of the best beats on Riot and the rhyming flows superbly. "I Remember" carries a more personal touch and speaks heavily on how Christ should be Lord of all, while "Love Scars" goes even deeper giving almost a chilling vibe. The song hits on the painful parts of this life but offers the hope that we have in trusting in Christ. Unfortunately, the track "Time Will Tell" is overly out of whack and disrupts this second half of the album. Ending the debut is "Riot (We Here") which is perfect house party play full of hot beats and nice spitting.

If you still dig the late 1990's style of rap (think early Cross Movement or Gospel Ganstaz), then you will definitely enjoy this, but if you're more in tune with what most of today's known rappers are doing, this may not fit your taste. Overall, the production is stellar, though every song doesn't flow as well as it could, and Christ is definitely first and foremost on this album. It should turn a few heads this year.